Looting a concern amid tornado clean-up efforts in southern Indiana 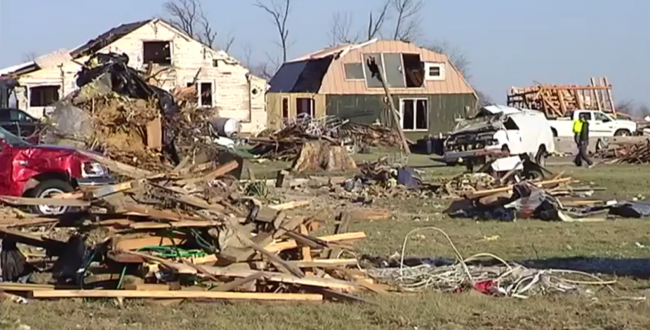 Roughly 200 volunteers came out to Owensville Saturday to help clean up the fields and homes destroyed by the tornado, including a group called the Three Nails Project. But not everyone on site always has good intentions.

Bob Morrison, director for the Three Nails Project says, “It’s been very good. Volunteers have shown up, lots of hands and feet, and it’s working. We’re getting something done.”

Rakes, piles of debris and volunteers are not something you typically see spread across a field.

One volunteer, Joshua Tucker says, “It hurts. It hurts to see that all of this is lost. All of their memories they’ve built with their families is gone.”

The donations and recovered items are simply uncountable.

But experienced volunteers have seen more than the evil aftermath of a storm.

Tracy Reel, also with Three Nails Project says, “Some people are opportunists, and they come out and then try and make some money off these people’s misfortunes.”

As people’s lives fill the fields, a looter’s greed is called to some piles of debris.

“The old saying goes: one man’s trash is another man’s treasure. The only problem is you didn’t ask to take that person’s treasure,” Tucker says.

Reel agrees: “It’s very sickening to see that the greed outweighs the compassion.”

“It’s heartbreaking,” Morrison says. “There’s always a bit of anger about it because we feel like they’re capitalizing on the tragedy of someone else.”

Another concern: what are volunteers going to find?

“I had a little old lady who was carrying a bag around with her all day, and then she hands it to me and says, ‘By the way this is marijuana,’” Morrison says.

Some volunteers just find the good in the midst of the evil.

“I feel like doing my part is coming out and doing the right thing, which is helping people in need because I would want the same thing for me as well,” Tucker says.

Volunteers say the security is very strict days after a disaster, as they sometimes find drugs and weapons. In order to identify volunteers, people have to sign in, fill out a form and wear a wristband to help prevent looting.