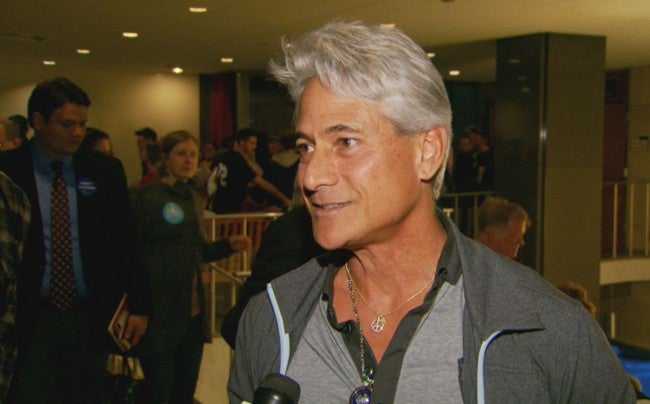 INDIANAPOLIS (WISH) – Olympic gold medal winner Greg Louganis came to Indianapolis for a book signing but agreed to appear before the City County Council on Monday night to advocate for gay rights.

On Tuesday he attempted to be in attendance at Gov. Pence’s news conference before a member of the governor’s staff kicked him out.

Louganis was waiting in a hallway when a member of Rep. Brian Bosma’s staff came to invite him to the House Speaker’s office.

He watched the news conference there along with other GOP leaders and gay rights activist Rick Sutton.

Louganis posed for a selfie with the Speaker of the House and for other photographs.

At one point, his dog sat on Bosma’s lap.

Bosma talked about it Thursday.

“Personal sports hero to me,” he said. “I watched him dive many times and he shared with me the personal hurt that he felt when he heard the incorrect message that Indiana supported discrimination.”

Sutton said that the Louganis visit with the Speaker was a key moment in this week’s debate. He believes it contributed to Bosma’s decision to pursue legal protections for gays and lesbians.

“I think it was his belief that if he could help people understand a little bit how we felt, it might help,” said Sutton of Louganis. “And he told them how he felt when he heard about the legislation as someone who had visited here over 30 years and always felt welcome, and he ended by saying that he came here out of love and he wanted to make sure they understood that.”

He was invited to Mike Pence’s office on Wednesday morning, and according to Sutton, had a pleasant visit.