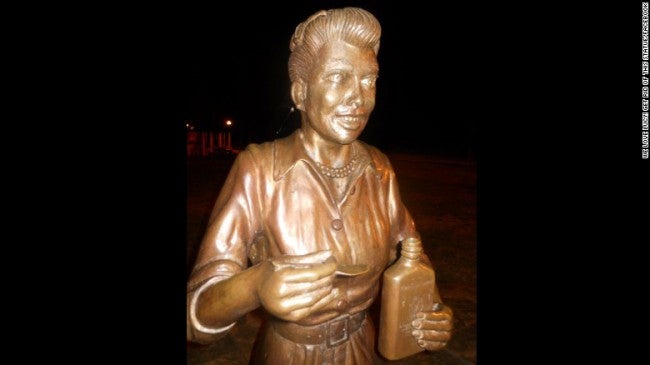 CELORON, New York (CNN) – Fans of the late, great Lucille Ball aren’t happy about a statue of the star that sits in a park in her hometown.

The life-size bronze statue in Celoron, New York, which shows Ball holding a bottle of Vitameatavegamin – a fictional elixir introduced in one of the more famous I Love Lucy episodes – has been likened by fans to a number of unflattering comparisons, including the snake from the movie Beetlejuice. Even the town’s mayor says he doesn’t care for it, CNN reports.

The statue was erected in 2009. Three years later, a Facebook group called “We Love Lucy! Get Rid of this Statue!” was created. An article this week circulated around the Internet, reigniting debate over what should become of the “ugly” statue.

What do you think? Should the statue be removed and replaced with a new, more accurate one?

We Stand Together / 51 mins ago