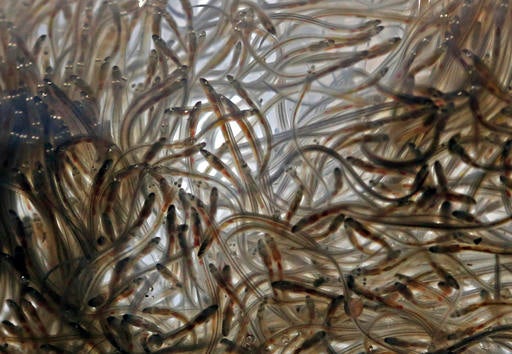 PORTLAND, Maine (AP) – Move over Powerball, there could be a new coveted lottery in Maine, and the prize would be wet and wriggly.

A proposal to create a new lottery system to allow people into Maine’s big-money baby eel fishery is the best way to keep the industry sustainable, some fishermen say. Baby eels are a prized resource in Maine, where they are fished from rivers and streams and sold to Asian aquaculture companies in countries such as China and South Korea.

The baby eels, or elvers, can sell for more than $2,000 per pound. The eels eventually get raised to adulthood and turned into food, such as sushi, with some spanning the globe to come back to American restaurants.

Right now, entry into the fishery is closed. A Maine trade group for elver fishermen is supporting a proposed state law that would allot new elver fishing permits via a lottery.

The group’s president, Darrell Young, said members of the fishery are aging and the lottery system will let new people in.

“We’re all getting older and eventually we’re going to pass away,” Young said. “As people die off or give up or whatever, there will be a drawing.”

The fishery includes about 425 fishermen and the average age is older than 50, said Rep. Jeffrey Pierce, R-Dresden, a supporter of the proposal. He said the fishery has lost about a dozen people in the last two years.

“One thing we start worrying about is, we have a lot of elderly fishermen right now, and if we lose a lot of them we lose a lot of knowledge, but there’s no quota to open it up for new entrances,” Pierce said.

A public hearing is scheduled to take place before the state Legislature’s marine resources committee on Feb. 13. A spokesman for the state Department of Marine Resources said the department will present its position on the proposal at the hearing, if it takes one.

It’s unlikely that new regulations will be in place before this year’s elver fishing season, which begins next month. The volume of catch has fluctuated recently, with fishermen coming close to the statewide quota of about 9,700 pounds last year, but falling well short in 2015.

The price increased dramatically in the early part of the decade, in part due to concerns about declining populations of eels in Europe. Maine elvers were worth less than $100 per pound as recently as 2009.