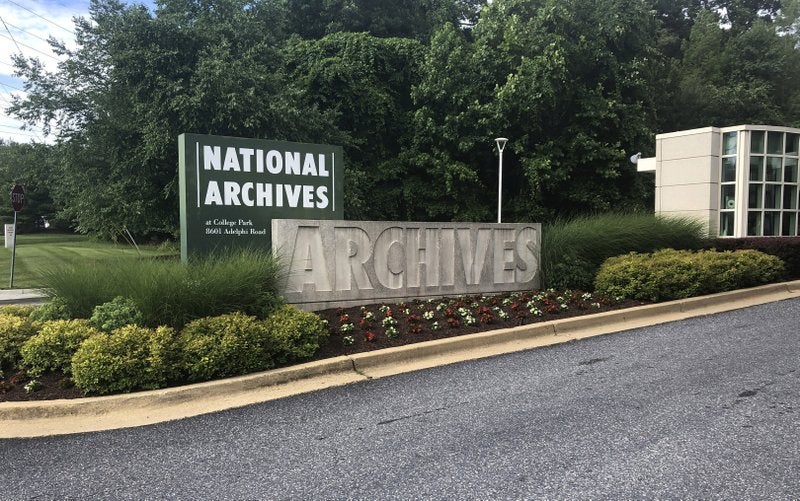 Robert Rumsby, 29, of Fredericksburg, Virginia, told investigators he took dog tags that belonged to four U.S. airmen killed in plane crashes in 1944, according to a criminal complaint filed in federal court last month.

The complaint charges Rumsby with theft of public records. He has an Aug. 14 trial date at the federal courthouse in Greenbelt, Maryland.

Rumsby told the Stars and Stripes newspaper he took the dog tags from the facility in College Park, Maryland, so he could give them to dead soldiers’ families.

Rumsby declined to be interviewed this week, telling an Associated Press reporter to “go fry someone else if that is your intention.”

“Feel free to publish a story on how the U.S. Government withheld information from families concerning personal effects being held without their knowledge for 70 plus years,” he wrote in an email.

Rumsby isn’t the first visitor to be accused of stealing from the National Archives facility in College Park.

Antonin DeHays, a French historian and author, was sentenced in April 2018 to one year in prison after pleading guilty to stealing at least 291 dog tags and other relics, most of which he sold on eBay and elsewhere for a total of more than $43,000.

“Some of these dog tags bore evidence of damage, such as dents and charring due to fire sustained during the crashes,” said a court filing in DeHays’ case.

The College Park facility stores thousands of dog tags that were seized by the German Luftgaukommandos, which prepared reports on Allied aircraft crashes during World War II.

In January 2017, National Archives staff were investigating possible thefts of artifacts when they discovered that dog tags belonging to World War II aviator Theodore Ream were missing from a box Rumsby had accessed in October 2016, according to the criminal complaint. Rumsby’s wife is the great niece of Ream, whose sister is the grandmother of Rumsby’s wife. Investigators recovered Ream’s dog tag from a shadow box at the grandmother’s home in Chesapeake, Maryland.

In 2015, Rumsby also accessed a box that contained dog tags for three airmen who died in a July 21, 1944, plane crash. When investigators questioned him on April 4, Rumsby retrieved the dog tags for two of those airmen from a shelf in his home and said he had given the third dog tag to a relative of that airman, according to the complaint.

Rumsby was quoted in an April 2018 article in the New York Times about civilians volunteering to identify the remains of soldiers in U.S. military cemeteries. The article said Rumsby, a former Army lieutenant, had spent years indexing unknown graves from World War II.

“Once the civilian judicial process is complete, his chain of command will evaluate to see if any military administrative action would be appropriate,” Puryear said in an email.