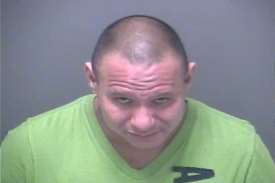 SHELBYVILLE, Ind. (WISH) – A Shelbyville man was arrested last week after police say meth and more than $70,000 were found inside a home.

Officers spoke with a homeowner on Montgomery Street last Friday and asked if they could search the house in reference to a narcotics investigation. Inside the home, officers found two bags of crystal meth, each weighing 20 grams.

Officials returned to the home with a search warrant and located large sums of money, totaling $70,600.

A man in the home, Francisco Guerrero, told police the meth was his. The drugs and cash were seized and Guerrero was taken into custody.