Man confronts Sean Spicer at book signing, accuses him of using racist language in past 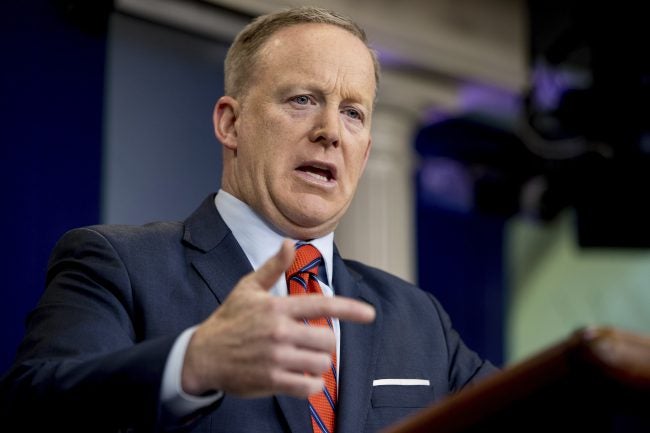 MIDDLETOWN, RI (AP) — A black man yelled at former White House press secretary Sean Spicer in a bookstore and accused Spicer of calling him a racial slur when they were students at a prep school decades ago.

Spicer was “taken aback” by the man’s “outrageous claim” and had no recollection of him or of being in school with him, his publicist said on Saturday.

Spicer was at a book signing in Middletown on Friday to promote his new book reflecting on his time at the press podium for President Donald Trump.

Alex Lombard, who was standing behind a small group of people waiting in line to meet Spicer and get him to sign the book, called out Spicer’s name and said they went to Portsmouth Abbey School together. Spicer waved to him and said, “Hey. Yeah. How are you?”

Lombard, a Newport native who now lives in Cambridge, Massachusetts, then accused Spicer of calling him the N-word and trying to fight him when they were at school.

“You don’t remember that you tried to fight me?” Lombard asked. “But you called me a (N-word) first.”

A security guard approached Lombard and led him away as he kept talking: “I was 14 then. I was a scared kid then, Sean. I’m not scared to fight you now.”

A Newport Daily News video of the encounter doesn’t show how Spicer, who was seated at a table signing books, reacted to being accused of using the racial slur. But his publicist said he was shocked by the allegation.

Spicer “can’t recall any incident like this happening” and was “not sure if this was just a stunt this man was pulling,” Regnery Publishing publicist Lauren McCue said.

She said Spicer has been in the news a lot the last couple of years and it was “a very odd time” for an accusation like this to be made.

Spicer has been promoting “The Briefing: Politics, the Press, and the President,” which just came out. The book paints a rosy if sometimes thorny picture of Trump, describing him as “a unicorn, riding a unicorn over a rainbow” and a man to whom the regular rules of politics don’t apply.