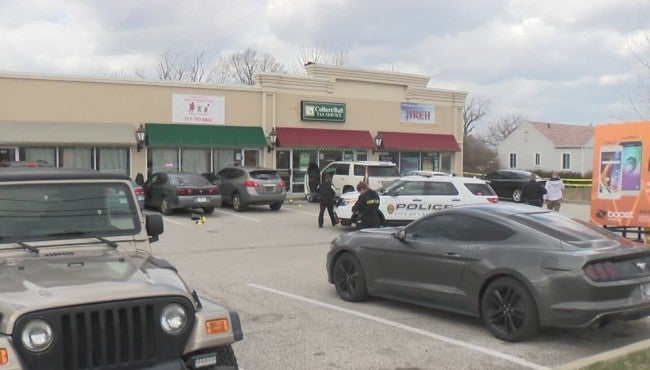 LAWRENCE, Ind. (WISH) — Lawrence police are trying to figure out who is responsible for the city’s first homicide of the year, a department spokesperson said.

It happened outside a strip mall in the 4200 block of North Franklin Road, just before 11:30 a.m. Tuesday.

“It is pretty upsetting,” Hernandez said. “Most everybody starts getting scared. Not wanting to come around. Who knows how it will affect our business?”

Hernandez’s security video shows a man scurry away from the strip mall and then turn around 11:18 a.m.

Police said an argument led to gunfire outside a tax services business. Officers found a black male, who later died at the hospital, passed out and bleeding from a gunshot wound in a Chevy Impala in the parking lot.

“This was not a random event,” Lawrence Police Department Deputy Chief Gary Woodruff said. “We believe this was maybe two individuals or a group of individuals that were involved in some kind of a dispute. Once you introduce guns into the situation, nothing positive results from that.”

Detectives said the shooting happened just outside a daycare. Parents came and picked up the kids early and no one reported any injuries.

At the same strip mall, in 2016, police said three men held up and robbed members of a church at gunpoint.

Police would not disclose a motive for the shooting or the victim’s name Tuesday.