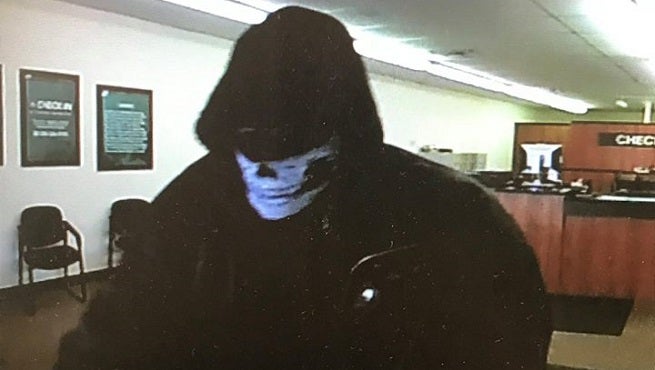 ELWOOD, Ind. (WISH) — A man wearing a skull mask and a black, hooded coat displayed a pistol during the robbery of a check-cashing store on Monday afternoon, police said.

Elwood Police Department on Tuesday posted photos of the suspect on its Facebook page.

The robbery happened just after 5 p.m. Monday at Check Into Cash, 1509 S. State Road 37. It’s part of strip mall with a Kmart at the intersection of Madison County Road 1100 North.

Police described the white male as 5-feet-6 or 5-feet-7 and about 180 pounds. In addition to the mask and coat, he wore blue jeans, tan shoes and black gloves. He displayed the pistol to a clerk and demanded money. The clerk cooperated, and the man left with an undisclosed amount of cash.

The man then fled the store eastbound initially on foot. Police said an effort to track the man was unsuccessful.

Elwood police said anyone with information about the robbery should call the department at (765) 642-0221.