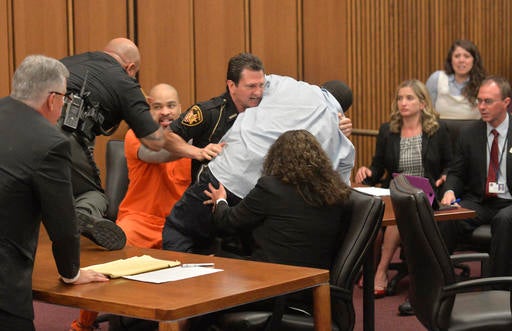 CLEVELAND (AP) – An Ohio man says he lunged at his daughter’s killer in court because the defendant smiled disrespectfully at him.

Courtroom deputies in Cleveland grabbed Van Terry after he leaped across a courtroom table Thursday minutes after a judge sentenced Michael Madison to death in the killings of his daughter and two other women.

Terry told WJW-TV that he was thinking about his daughter when he went after Madison. Madison didn’t appear to be injured.

The victims’ bodies were found near Madison’s East Cleveland apartment in 2013.

Terry says it’s fine if he’s charged with going after Madison because he did the right thing.

A spokesman for the Cuyahoga County prosecutor’s office says the attack is being reviewed.