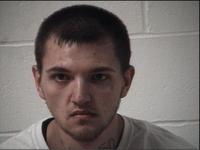 AUSTIN, Ind. (WISH) — The man who pleaded guilty to murdering a 78-year-old man in 2015 was sentenced to 85 years in prison Thursday.

Caudill received the maximum sentence in the case.

Police said Caudill and his brother were attempting to rob the store when the murder happened.

His brother, 31-year-old Christopher Caudill of Austin, is charged with assisting a criminal, theft and other counts.The Associated Press contributed to this report.