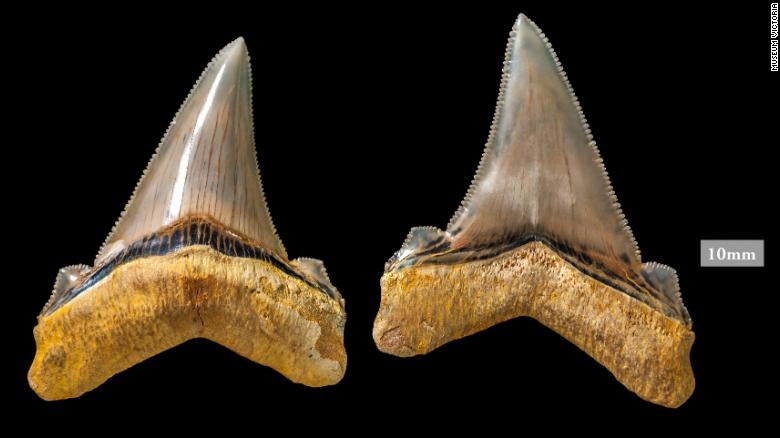 AUSTRALIA (CNN) — Amateur fossil enthusiast Phil Mullaly knew he had found something special when he spotted something glimmering in a boulder.

Mullaly was walking along Jan Juc, a renowned fossil site along Victoria’s Surf Coast in south Australia, when he spotted a partially exposed shark tooth in the rock.

“I was immediately excited, it was just perfect,” Mullaly said.

That was just one of multiple teeth Mullaly found that day in 2015. Three years later, scientists have confirmed his hunch, saying Thursday that the teeth are all about 25 million years old and belonged to an extinct species of mega-toothed shark — the Great Jagged Narrow-Toothed Shark (Carcharocles angustidens).

The ancient shark was believed to grow up to about 9 meters (30 feet) long, double the size of a great white shark. The teeth discovered on the beach were around 7 cm (2.75 inches) in length.

Mullaly’s is one of the rarest finds in the history of paleontology, according to Erich Fitzgerald, a palaeontologist at Museums Victoria who led a team to excavate the site where the initial fossils were found.

“If you think about how long we’ve been looking for fossils around the world as a civilization — which is maybe 200 years — in (that time) we have found just three (sets of) fossils of this kind on the entire planet, and this most recent find from Australia is one of those three,” Fitzgerald told CNN.

‘My jaw sort of dropped’

Fitzgerald said he was first contacted by Mullaly last year about a different discovery, during which he briefly mentioned the find at Jan Juc, but it wasn’t until the amateur fossil hunter brought the teeth into the museum that Fitzgerald realized how significant the discovery was.

Sharks have the ability to regrow teeth, and can lose up to a tooth a day. That cartilage does not easily decompose, which is why individual shark tooth fossils are somewhat common. However, Fitzgerald said that finding multiple teeth from a single shark is extremely rare.

When Mullaly told him the boulder he found was still on the beach, Fitzgerald said “my jaw sort of dropped.”

Dr. Erich Fitzgerald at the Jan Juc site where the fossil was found.

Fitzgerald organized a team to get down to the south Australia coast. They chose to conduct the excavation in December 2017, when the tides were low. Within 20 minutes of searching, Fitzgerald’s team started to find teeth.

In the end, they extracted more than 40 different specimens. Fitzgerald attributes the finds to dogged work and a bit of luck.

“Paleontology is one of the last branches of science where serendipity, where chance events, timing, coincidence plays a most vital role,” he said.

Researchers believe those teeth were left behind as a result of getting lodged in the carcass of the Great Jagged Narrow-Toothed Shark as smaller sharks fed on it after the much larger animal died.

Fossilized teeth of the Sixgill shark.

“The teeth of the sixgill shark work like a crosscut saw, and tore into the Carcharocles angustidens like loggers felling a tree. The stench of blood and decaying flesh would have drawn scavengers from far around,” Museums Victoria palaeontologist Tim Ziegler said in a statement.

“Sixgill sharks still live off the Victorian coast today, where they live off the remains of whales and other animals. This find suggests they have performed that lifestyle here for tens of millions of years.”

Fitzgerald’s team has finished their field research and are now working to learn more about how the teeth of the Great Jagged Narrow-Toothed shark developed in order to better understand its evolutionary history.

“If we can find out any more clues about the lifestyle (and) the ecology of this extinct species, that might shed light as to what led to its extinction,” he said.

Fitzgerald said he believes there may be even more shark teeth at Jan Juc and even parts of a spinal column lodged in the cliff, based on what he saw during the excavation. For now, those potential samples are about 20 meters (65 feet) high, out of the reach of excavators.

“I’m willing to bet there’s more up there,” he said. “We’ll be waiting and ready for the next expedition down to salvage a giant prehistoric shark.”