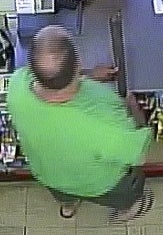 INDIANAPOLIS (WISH) The Indianapolis Metropolitan Police Department is looking for a man who is accused of two robberies two hours apart. The man is said to have used a machete as his weapon in both robberies.

James Cohlmeyer, 55, was one of the robber’s victims. Cohlmeyer said he was waiting at a bus stop near the intersection of East Street and Orange Street on Sunday morning.

He said, “He got out of his car and started walking very aggressively towards me, brandishing what appeared to be a knife. Then when he got closer it was obvious that it was a machete-type knife.”

Cohlmeyer, who uses a cane to get around, said the robber demanded $5 from him. Cohlmeyer said he gave the knife-wielding man a $20 bill, but then the robber got greedy.

“He held the machete up a little further and I gave him another one and he said, ‘Give me another one or I’ll cut your legs off!'” Cohlmeyer said.

Two hours later a Family Dollar store on Prospect Street was robbed by a man who was holding a machete. Police said the man was able to run away with an unknown amount of money.