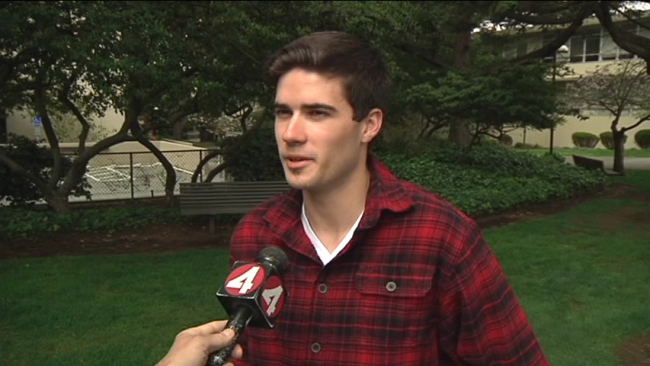 SAN FRANCISCO (KRON) – It is the video that still has a lot of people talking.

Now, the man who captured the incident on his cellphone talked exclusively to Dan Kerman with WISH-TV’s sister station KRON about pressing charges.

By now, you are likely one of the more than 2.5 million people to view this viral video where Bonita Tindle, a female African American San Francisco State student, confronts Cory Goldstein, a male white student, to say it’s inappropriate for him to have dreadlocks.

“I was the one who filmed it,” San Francisco State student Austin King said.

King said he just happened to be walking through the student center when he overheard the woman in the video say she was going to find the boy who said something rude to her.

“My instincts kind of kicked in, and I thought, ‘You know, something might be going on,’” King said.

King, who’s a cinema major, decided to pull out his phone and start filming.

“I just wanted to create an objective recording of what happened,” King said.

King said he has filmed on campus before, but nothing that has received as much attention as this.

“Here we just have someone who’s because of their race is just being harassed and pulled around,” King said. “It’s just not right.”

The video has been a lightning rod on social media for a discussion of racial issues.

“Even if we are just starting a conversation about it, I feel like that’s a move in the right direction towards approaching the problem here,” King said.

King said he initially feared for Goldstein’s safety until Tindle’s attention turned toward him.

“She had no right to grab me or grab my camera,” King said. “It felt wrong.”

King managed to hang on to his phone. He now plans to press charges against Tindle.

Goldstein has chosen not to press charges.

As for whether there will be charges, university police said they are still investigating.

KRON was not able to connect with Tindle.

We are aware of the video made of an incident which occurred on campus yesterday afternoon. University police were called to the scene of the incident when it occurred. The two individuals involved in the incident are not San Francisco State University employees. Further, no criminal charges have been pressed at this time to the University’s knowledge.

San Francisco State University promotes the rights of the campus community to engage in free speech, but does not condone behavior that impedes the safety or well-being of others. We are taking the matter seriously and will promptly and thoroughly investigate this incident through applicable University channels, including our campus student conduct procedures

The Associated Students of San Francisco State University has issued the following statement on the video: