Manhunt for ‘terrorizing’ suspect over 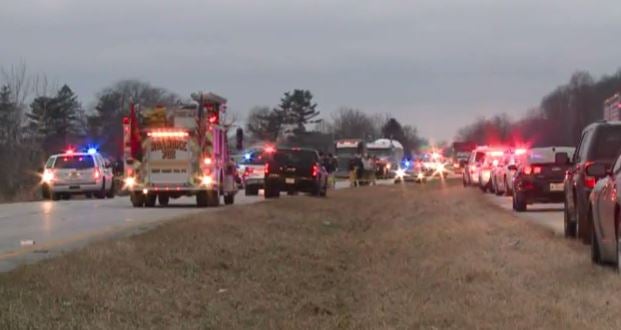 HUNTINGTON CO., Ind (WANE) – A 20-hour manhunt for an armed suspect that the Huntington County Sheriff’s Department said was “terrorizing” the city came to an end early Wednesday.

“Subject that had been terrorizing Huntington for the last 24 hours has been captured and no longer a threat,” the department wrote in a Facebook post Wednesday morning, moments after a police chase along U.S. 24 ended with a driver at a local hospital.

Huntington Police Chief Chad Hacker said in a news release that Wednesday’s incidents began at 6 a.m., when police were called to the Phillips 66 convenience store at 736 South Jefferson Street on a report of an armed robbery. Hacker said officers there learned that shots had been fired inside the gas station and that an employee was hurt.

A neighbor told 24-Hour News 8’s sister station, WANE, that he heard the station’s owner was opening up for the day when someone tried to rob them and ended up shooting the owner in his hand.

Hacker said as police were investigating at the Phillips station, a vehicle was reportedly stolen nearby.

A short time later, a state trooper spotted the Chevrolet Trailblazer along U.S. 24 and, after additional units caught up, tried to pull it over, according to Sergeant Ron Galaviz with the Indiana State Police.

The SUV sped off on both west and eastbound U.S. 24, Galaviz said. Eventually, police threw out stopsticks along westbound U.S. 24 near Old Fort Wayne Road and “slowly and safely deflated” the SUV’s tires. Galaviz said the SUV then rolled into the eastbound lanes of the highway, where it collided with a Huntington City Police Department cruiser on the edge of the road.

Galaviz said the officer was not hurt. The driver of the SUV, who was not identified, was hurt, though Galaviz did not say if it was related to the crash. He was taken to a local hospital in critical condition with a head injury. A bullet hole could be seen in a window of the SUV.

During a press conference midday Wednesday, Hacker confirmed the incidents were related to the report of shots fired and a manhunt in Huntington that drug on throughout Tuesday, all involving the same man. Police were at a southeast Huntington home most of the day Tuesday after a shots fired report, and late Tuesday, Huntington County issued an alert to residents about a wanted subject. That alert said the Huntington Police Department is looking for a white man, who is 5-foot, 9-inches, and was last seen wearing a red and green coat, white tee shirt with a skull on the front, and blue jeans.

By Wednesday morning, that search was over and that man was captured. The sheriff’s department wrote, “Big thanks goes out to all police agencies involved and the hard work they have put in over the last 24 hours.”

Hacker said called the whole situation “domestic” and said it was never an “active shooting” situation. He added that Huntington Police never ordered any lockdowns.