Manning writes letter to family of teen killed in crash 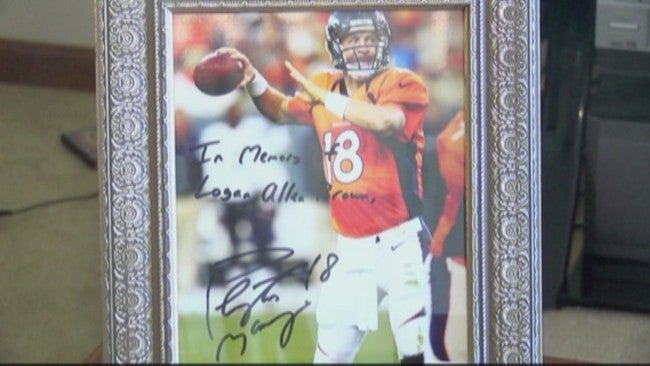 EVANSVILLE, Ind. (CNN) – Denver Broncos quarterback Peyton Manning sent a letter to an Evansville family recently. A letter the family calls a gift of a lifetime.

Logan Brown’s family said this week would have been his 16th birthday. He was killed in a car crash in March.

They said they recently received an autographed picture and a hand-written letter from Manning, saying how honored he was Logan was such a big fan.

It was a birthday surprise the family said they didn’t expect.

“To take the time to send something back to a situation in Evansville, Indiana, that he probably doesn’t know anything about. It’s important to see that they’re humans and for these other kids to see you never forget where you come from,” Logan’s father Charles told CNN.

Logan’s grandmother Gayle Ricketts said when he was little they took him to a football game. That’s when he became a fan. She said when Peyton moved to the Broncos, he deserted the Colts.

“And I know Logan is up there looking down. He’s smiling. I think he will be happy,” Ricketts told CNN.

Family members say this gift is one Logan really would have cherished.

Police say the other driver involved in the crash had a blood alcohol level of four times the legal limit. That driver is charged with drunk driving and causing death and serious injury.

What do you think about Manning still supporting his fans in Indiana? Tell us your thoughts on our Facebook page.