Many to march, rally against controversial law on Saturday 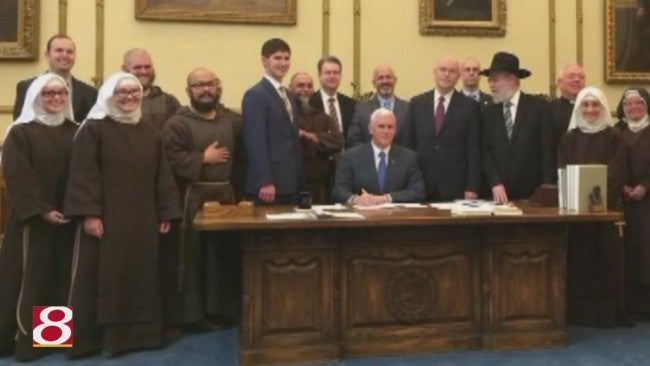 INDIANAPOLIS (WISH) – Thousands of people are expected to meet at Monument Circle Saturday at 12:30 p.m. to march to the Indiana Statehouse in opposition of the Religious Freedom Restoration Act. Following the march, there will be a rally on the state capitol’s south lawn at 1:00 p.m. – 3:00 p.m.

The group behind the anti-RFRA event is concerned the new law, signed earlier this week by Governor Mike Pence in private, could negatively affect members of the LGBTQ community. They also believe victims of domestic violence could be in jeopardy because they said the law could allow an abuser to claim certain domestic laws don’t apply because of a religious belief that someone has the right to discipline their spouse and children as they see fit. The group also says the RFRA could put public safety in jeopardy because police officers could refuse to protect places like a mosque or synagogue and say it goes against their religious beliefs.

Many have been taking to social media to express their thoughts and concerns. Market expert Lorraine Ball, owner of Roundpeg, said the conversation is only going to grow with the City of Indianapolis hosting the NCAA Men’s Final Four in one week.

Visit Indy estimates more than 70,000 basketball fans will travel to the city for the Final Four.

Mayor Greg Ballard has said he’s against the so-called Religious Freedom Act because of the negative image it gives the state.