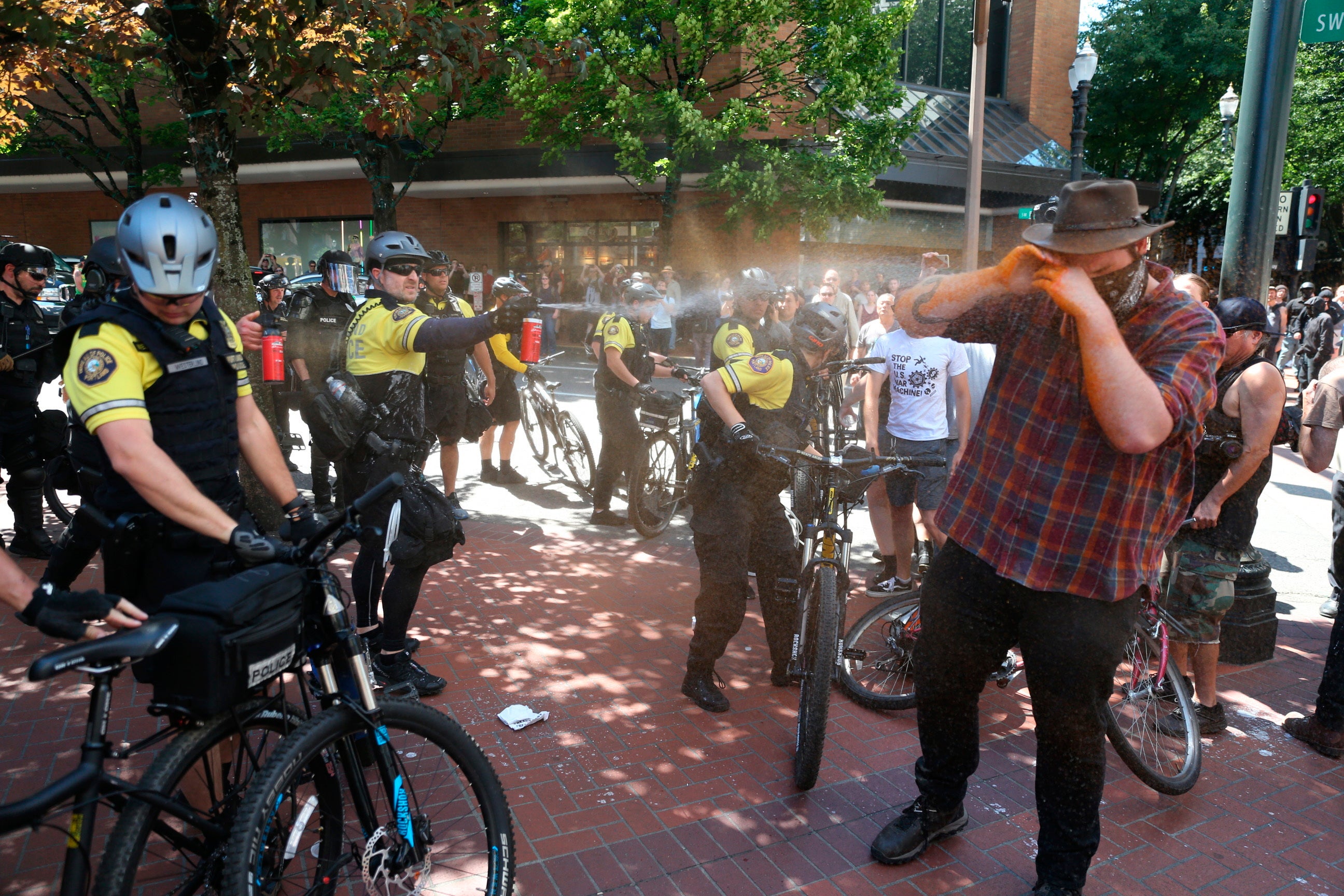 After a confrontation between authorities and protestors, police use pepper spray as multiple groups, including Rose City Antifa, the Proud Boys and others protest in downtown Portland, Ore., on Saturday, June 29, 2019. In social media posts later in the day, police declared the situation to be a civil disturbance and warned participants faced arrest. (Dave Killen/The Oregonian via AP)
by:
Posted: Jul 1, 2019 / 01:14 PM EST / Updated: Jul 1, 2019 / 01:14 PM EST

PORTLAND, Ore. (AP) — Competing demonstrations spilled into the streets of downtown Portland on Saturday, with fights breaking out in places as marchers clashed.

At least three groups had planned rallies or demonstrations at different sites in the city, including members of the so-called Proud Boys and anti-fascist groups that include “antifa,” and the fights occurred when participants of the opposing groups met, according to The Oregonian/OregonLive .

In a statement Saturday night, the Portland Police Bureau said three people were arrested on assault and harassment charges in connection with the protests. Police said medics treated eight people, including three police officers, at the scene. Three people were taken to hospitals after they were attacked, police said.

Andy Ngo, who describes himself as an editor at the conservative website Quillette and says he is “hated by antifa,” said on his Twitter feed that he was attacked by anti-fascist protesters and had to be taken to the hospital to treat injuries to his face and head. Ngo also said the attackers took his camera equipment.

Protesters also clashed with police, throwing water bottles and eggs at officers. In separate social media posts later in the day, police declared the situation to be a civil disturbance and warned participants faced arrest.

The Portland Police Bureau on Twitter asked for the public’s help in investigating violent assaults. The bureau also said that it has received reports that some of the milkshakes thrown by protesters contained quick-drying cement.

“Demonstration events are very fluid in nature and the management of these events is complex,” Assistant Chief Chris Davis said in a statement. “There are hundreds of peaceful free speech events in the City in a given year that do not result in violence. Unfortunately, today some community members and officers were injured. We are actively investigating these incidents to hold those responsible accountable.”

Information from: The Oregonian/OregonLive, http://www.oregonlive.com