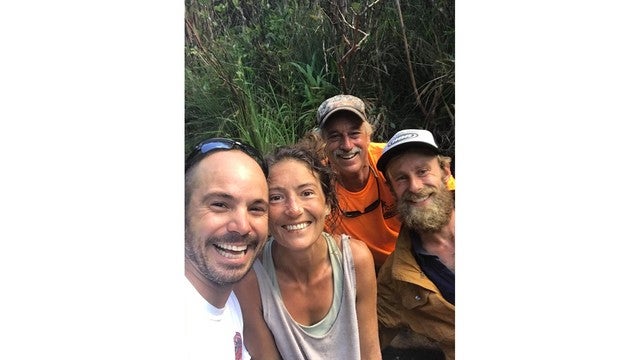 HONOLULU (KHON2) – After a two-week survival in the forest, missing Maui hiker Amanda Eller has been found, said her father.

MPD said she went to the post office before heading to the Makawao Forest Reserve.

Friends and family believed she went into the forest and that’s where they have been searching for her since she was reported missing on May 9.

“I felt in my heart she was alive,” said Eller’s mother, Julia. “I never gave up hope for a minute. Even though at times I would have those moments of despair, I stayed strong for her ’cause I knew we would find her if we just stayed with the program, stayed persistent and that we would eventually find her.”

Amanda’s father says that she was trying to find her way back when she got lost.

According to a FindAmanda Facebook page post, she was found injured in a ravine near a waterfall by air search.

“I’ve been looking at pictures of that girl 100 times a day. It was no mistake that it was her,” Berquist said. “We were freaking out. We were trying not to trip over ourselves trying to get to her too fast.”

The three men said Eller was looking for food when they spotted her. She had no shoes and no socks on.

She was then air evacuated and sent to a hospital to be treated.

“We found somebody’s daughter — by doing it right — by not giving up,” said Berquist.

Eller’s mother said she received word around 3:30 p.m. and reunited with Amanda in the hospital.

“I was running in past the reporters. I ran in, and they took me back to her room and I could see her in the ER where she was being treated. She could see me through the curtains,” Eller’s mother said. “We started crying tears all the way ’till I could get there to hug her.”

The mother says that Amanda was in ​​​​​​”surprisingly good shape” for what she had been through.

She says that her daughter is talking, alert, and has a fracture on her leg.

But despite the state the hiker is in, Julia says that she hadn’t been able to talk about everything just yet.

“I’m sure she had a whole range of emotions.”

And Eller wasn’t going to give up.

During her time in the forest, Amanda had been resourceful. She used nature’s resources to keep herself alive.

Her mother says that she used water sources and ate the berries she found — strawberries, guava, and other items to sustain her.

“There was even discussion of her going home this evening believe it or not,” Eller’s mother said. ” But we–her dad said no. Just for the night, let her stay here and let them take care of you a little bit.”

Troy Helmer, one of the members who found Eller, adds that she’s 20 pounds underweight.

“It’s like a relief we were on our last few days of doing this physical search, and we found her, and she can talk, and she is bawling and is talking to her father on the phone and super relieved,” Haynes said. What we know is they’re airlifting her out of there and I’m going out there to meet the family. Amanda is alive and this community brought her home.”

Eller’s mother is thankful of the help that their family has gotten.

“The Maui community here — caring and helping in the search,” she said. “We couldn’t have done it without every person in so many ways.”