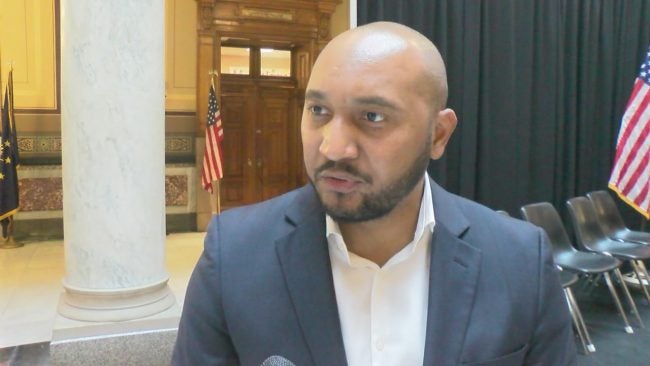 INDIANAPOLIS (WISH) — The city’s deputy mayor is apologizing for what he calls a poor word choice in a post he made on Facebook. Some are calling for disciplinary action after he posted the racial slur.

Mayor Joe Hogsett said Thursday morning that he wasn’t sure what, if any consequences Dr. David Hampton would face. He said he hadn’t spoken to him about the post, but intended to Thursday afternoon. 24-Hour News 8 reached out to the mayor later in the day, but have not heard back.

Dr. Hampton took to social media to address the issue. He didn’t deny the post, instead he apologized. He said in part, “While I acknowledge that I am held to a higher standard in my roles as a religious leader and city official, I also acknowledge my human flaws.”

Hogsett says he’s glad Hampton apologized, but he is profoundly disappointed in his choice of words.

“Even though it’s a personal post and I’m sure it was intended to go only to a friend or a comment made in his personal capacity, that when he does speak on social media, it may very well be interpreted by many as speaking on behalf of the administration,” said Hogsett.

In the post, President Donald Trump is surrounded by African-American leaders for Black History month. Hampton wrote racially charged comments underneath the post. Not long after the comments appeared on Facebook, they were deleted, but not before somebody captured a screen shot.

“I think it’s awful. That’s really inappropriate, especially in his position and to his culture,” said Angie Cook, who lives in Indianapolis.

Hogsett said he isn’t sure if the city has a social media policy. However, this could be an opportunity to create one.

“I think when you’re in public office like that, whether it be president, any of them, you shouldn’t be on social media retaliating, fighting with words on social media,” said Cook.

Marion County Republican Chairman and Minority Leader of the Indianapolis City-County Council, Michael McQuillen, shared the post with 24-Hour News 8 Wednesday night. He demanded that the mayor take action. He and the mayor have been invited to a race and cultural leadership meeting on Friday and does not want to comment until after the meeting.

Dr. Hampton has not returned our calls and emails.