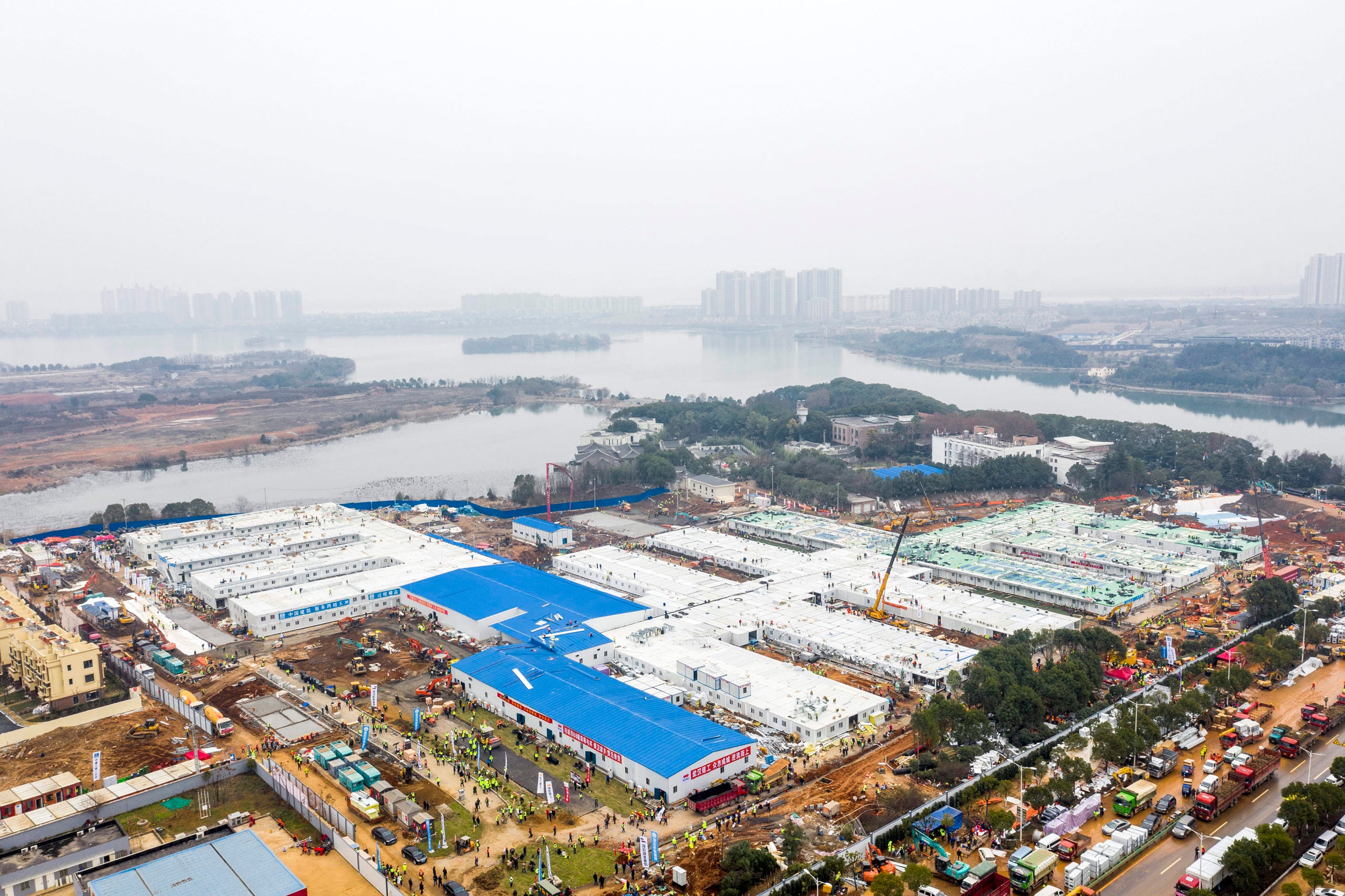 The Huoshenshan temporary field hospital under construction is seen as it nears completion in Wuhan in central China's Hubei Province, Sunday, Feb. 2, 2020. The Philippines on Sunday reported the first death from a new virus outside of China, where authorities delayed the opening of schools in the worst-hit province and tightened quarantine measures in a city that allow only one family member to venture out to buy supplies. (Chinatopix via AP)
by: Associated Press
Posted: Feb 2, 2020 / 09:43 PM EST / Updated: Feb 2, 2020 / 09:43 PM EST

BEIJING (AP) — China sent medical workers and equipment Monday to its just-completed 1,000-bed hospital for treating victims of a new virus that has caused 362 deaths and more than 17,300 infections at home and abroad.

Reopening of schools was also delayed to keep the virus from spreading further in hardest-hit central Hubei province, where the specialized hospital in the provincial capital Wuhan was completed in just 10 days. A second hospital with 1,500 beds is under construction. Restrictions were tightened still further in one city by allowing only one family member to venture out to buy supplies every other day.

Medical teams from the People’s Liberation Army continued to arrive in Wuhan to relieve the city’s overwhelmed health workers and to work at the new hospital, located in the countryside far from the city center. Footage shown by state broadcaster CCTV showed prefabricated wards equipped with state-of-the-art medical equipment and ventilation systems.

“The lack of hospital rooms forced sick people to return home, which is extremely dangerous. So having additional (beds) available is a great improvement,” Zhong told CCTV’s 24-hour news channel.

Zhong played a major role in overcoming China’s 2002-2003 outbreak of SARS, a coronavirus from the same family as the current pathogen.

In a sign of the economic toll of the outbreak, China’s Shanghai Composite index plunged 8.7% as financial markets reopened Monday following the Lunar New Year holiday.

China’s new totals of 361 deaths and 2,829 new cases over the last 24 hours, bringing the Chinese total to 17,205 cases, come as other countries continued evacuating hundreds of their citizens from Hubei and imposed travel restrictions affecting Chinese or people who recently traveled in the country.

The World Health Organization said the number of confirmed cases will keep growing because thousands of specimens from suspected cases have yet to be tested.

The Philippines banned the entry of all non-citizens from China after two cases were confirmed there, including the only death outside China. The U.S., Japan, Singapore, Indonesia, New Zealand and Australia have imposed similar restrictions despite criticism from China and WHO’s guidance that such measures were unnecessary.

About 150 cases have been reported in two dozen other countries. The Philippine Health Department said a 44-year-old Chinese man from Wuhan died from the virus and his companion remained hospitalized. Vietnam counted its seventh case, a Vietnamese American man who had a two-hour layover in Wuhan on his way from the U.S. to Ho Chi Minh City.

Also, six officials in the city of Huanggang, next to Wuhan in Hubei province, were fired over “poor performance” in handling the outbreak, the official Xinhua News Agency reported. It cited the mayor as saying the city’s “capabilities to treat the patients remained inadequate and there is a severe shortage in medical supplies such as protective suits and medical masks.”

The trading and manufacturing center of Wenzhou, with nearly 10 million people in coastal Zhejiang province, confined people to their homes, allowing only one family member to venture out every other day to buy necessary supplies. Huanggang, home to 7 million people, imposed similar measures on Saturday.

With no end in sight to the outbreak, authorities in Hubei and elsewhere extended the Lunar New Year holiday break, due to end this week, well into February to try to keep people at home and reduce the spread of the virus. All Hubei schools are postponing the start of the new semester until further notice.

The crisis is the latest to confront Chinese leader Xi Jinping, who has been beset by months of anti-government protests in Hong Kong, the reelection of Taiwan’s pro-independence president and criticism over human rights violations in the traditionally Muslim territory of Xinjiang. Meanwhile, the domestic economy continues to slow, weighed down by slowing demand and the trade war with Washington.