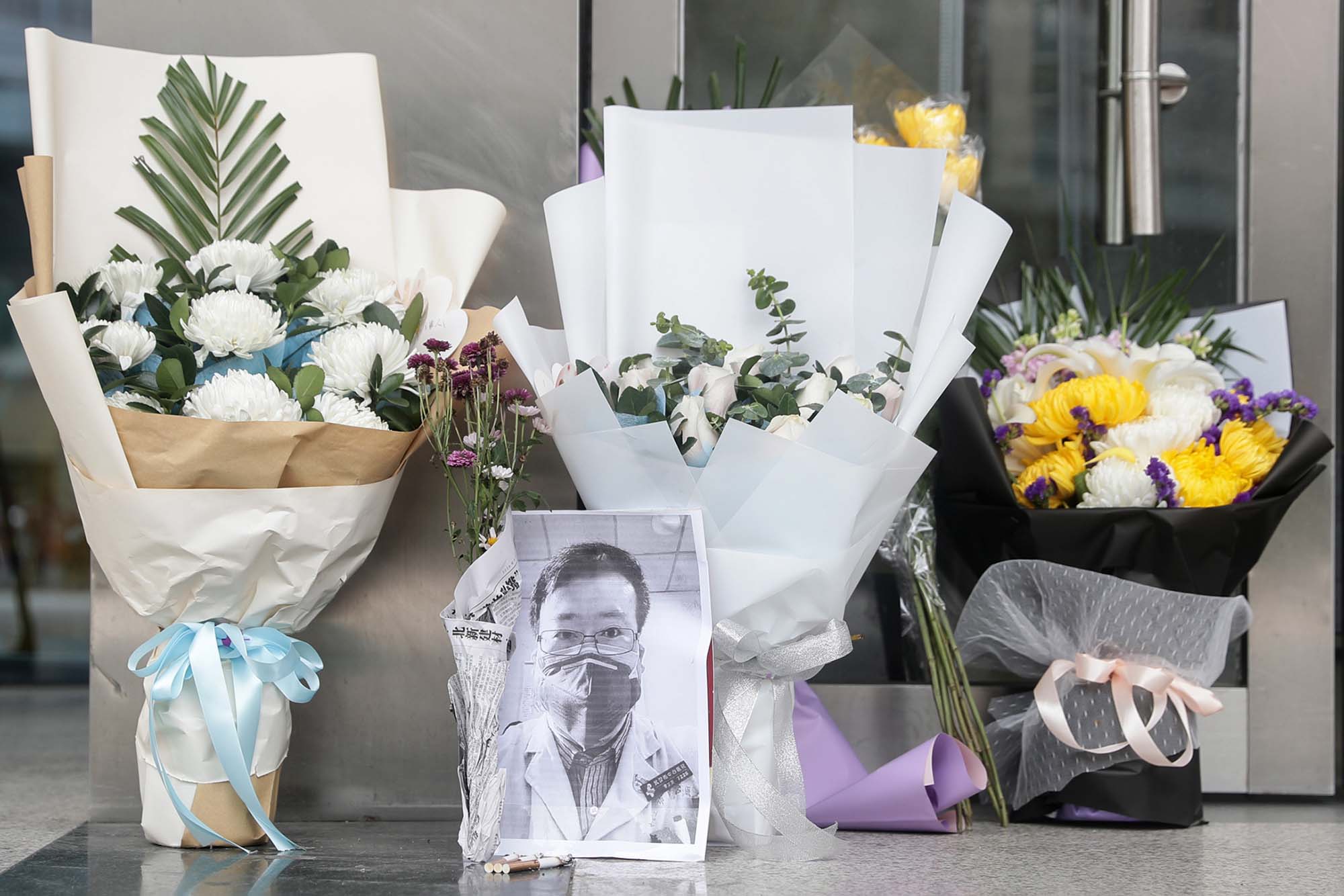 TOPSHOT - A photo of the late ophthalmologist Li Wenliang is seen with flower bouquets at the Houhu Branch of Wuhan Central Hospital in Wuhan in China's central Hubei province on February 7, 2020. - A Chinese doctor who was punished after raising the alarm about China's new coronavirus died from the pathogen on February 7, sparking an outpouring of grief and anger over a worsening crisis that has now killed more than 630 people. (Photo by STR / AFP) / China OUT (Photo by STR/AFP via Getty Images)
by: Faith Karimi, Dakin Andone and Lily Lee, CNN
Posted: Feb 8, 2020 / 10:31 AM EST / Updated: Feb 8, 2020 / 10:08 PM EST

(CNN) — The novel coronavirus’s global death toll has surpassed that of the SARS outbreak in the early 2000s.

The latest death toll from the provincial health authority in Hubei, China, brought the global death toll to 805.

The total number of deaths in mainland China is at least 803. Two deaths have been reported in the Philippines and Hong Kong.

The news came a day after authorities confirmed a US citizen died of the coronavirus in the city of Wuhan, where the virus appeared in late December before spreading to at least 28 countries.

The 60-year-old American died at a local hospital Thursday, according to the US Embassy in Beijing. The embassy declined to disclose more details out of respect for the family’s privacy.

In a statement to CNN, the Chinese Foreign Ministry extended its condolences and described the patient as a “Chinese-American.” The Chinese government had kept in contact with the patient’s family in China, the statement said, and was working to assist the US and the family in “dealing with the aftermath.”

While most of the deaths have been limited to China, the coronavirus has raced across the continents, infecting more than 30,000 people, paralyzing the world’s second-biggest economy and trapping residents at home and in quarantine.

Among them are hundreds of Americans evacuated from Wuhan. Two evacuation flights landed in the US Friday in what a State Department official described as likely the last chartered flights.

After evacuees arrived in the US, five people housed at the Travis Air Force Base in Northern California were hospitalized with symptoms of coronavirus, the US Centers for Disease Control and Prevention said Friday. They were taken to an undisclosed hospital with fevers and are in isolation as they undergo more tests.

Other evacuated Americans are housed on military bases across the country. Nearly 60 arrived at Camp Ashland near Omaha, Nebraska, late Friday. They were screened multiple times and none showed symptoms of the virus, a Health and Human Services spokesman told CNN.

Nearly 200 Americans from the first evacuation flight are days into a two-week quarantine at the March Air Reserve Base in Southern California. Another 350 evacuees arrived Wednesday and were taken to Travis AFB and the Marine Corps Air Station Miramar in San Diego.

Evacuees are subject to a 14-day federally mandated quarantine. Those who show symptoms will be taken to area hospitals for isolation and treatment.

The CDC on Saturday allowed four passengers who had been aboard a cruise ship docked in New Jersey to be discharged from a local hospital after they were evaluated for coronavirus, according to Gov. Phil Murphy.

The ship docked in Bayonne, New Jersey, Friday after a journey through the Caribbean. Twenty-three passengers aboard the Anthem of the Seas were evaluated and cleared at the port near New York City.

The four others were not. According to a CDC spokesperson, a pair of relatives had become ill and all four were assessed for coronavirus in an abundance of caution.

Three of the individuals were diagnosed with the flu, Murphy said, and the fourth stayed in a separate cabin and did not have any symptoms.

Earlier Saturday, Royal Caribbean said it was awaiting test results from the CDC to decide whether passengers on its next voyage will be able to board. Because of the high volume of testing being done by the CDC, results won’t be available for another day or two, Royal Caribbean said.

The ship was originally scheduled to embark Friday but was delayed first until Saturday. The cruise line later pushed departure back to at least Monday.

As a result of the outbreak, two US-based cruise lines are forbidding people with Chinese, Hong Kong or Macau passports from boarding.

More than 7,300 people are being quarantined on two cruise ships docked in Hong Kong and Japan over concerns they were inadvertently exposed to the coronavirus by infected passengers.

At least 64 people from all over the world have tested positive for coronavirus on the cruise ship docked in Japan, including 13 Americans.