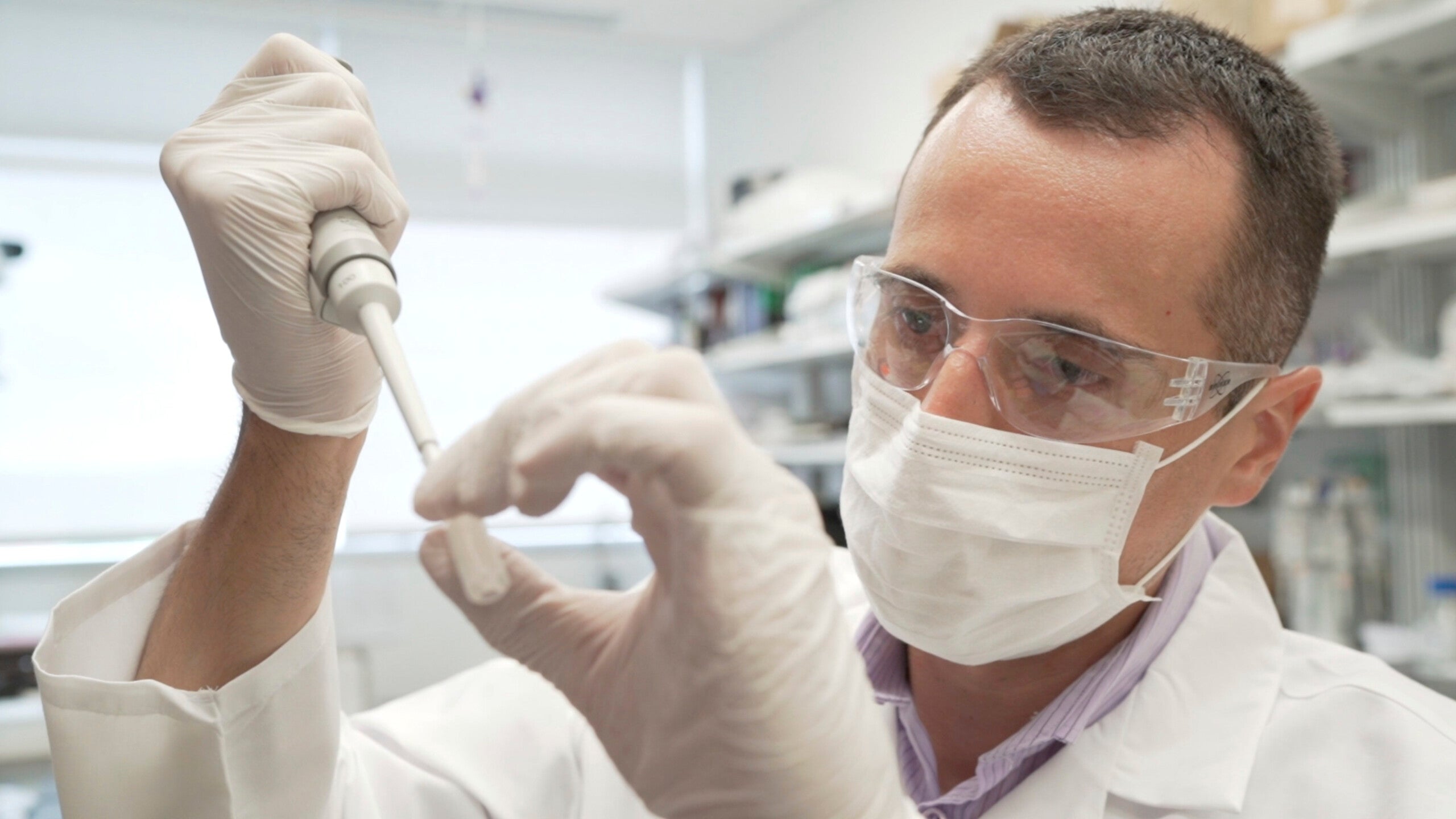 In this image from video provided by Washington University, researcher Nicolas Barthelemy works on a p-tau217 test for Alzheimer's disease at a laboratory in St. Louis, Mo., on Monday, July 27, 2020. Several companies and universities have developed versions of these tests, which look for a form of tau protein, one of the substances that can build up and damage the brains of people with Alzheimer’s. (Huy Mach/University of Washington via AP)
by: Sandee LaMotte, CNN
Posted: Dec 28, 2020 / 07:42 AM EST / Updated: Dec 28, 2020 / 07:42 AM EST

(CNN) — Lives lost, families torn apart, economies ruined — these tragedies arejust some of the devastation caused by the deadly novel coronavirus as it swept the globe in 2020.

The pandemic brought the world’s scientists together in an unprecedented race to develop vaccines. Meeting that goal in under a year is “truly historic,” according to Dr. Anthony Fauci, director of the National Institute of Allergy and Infectious Diseases.

Covid-19 was not, however, the only battle waged by doctors and researchers over the last year. The fight against many other diseases and conditions that plague humanity continued this year despite challenging circumstances.

Here are some of the top non-pandemicadvances in health care during 2020 that you may not have heard much about — many of them nominated by major health organizations.

In June, a vaccine years in the making finally brought an end to the second deadliest outbreak of Ebola, which killed over 2,200 people in the Democratic Republic of the Congo.

Transmitted by exposure to bodily fluids, often when relatives were bathing the dead body for burial, Ebola is highly contagious and deadly — killing up to 90% of its victims in past outbreaks.

The World Health Organization called the use of the vaccine by the DRC and other African countries a “milestone” in the fight against Ebola.

The fight against dementia and Alzheimer’s — which affect some 50 million people worldwide — continued during 2020, with some good news.

“Advances in biomarkers for Alzheimer’s disease have perhaps been the biggest story this year,” said Joe Balintfy, a spokesperson for the National Institute on Aging.

Blood-based tests are being developed to detect beta-amyloid plaques and tau tangles, two of the hallmark signs of Alzheimer’s disease. Up until recently, the only way to test for Alzheimer’s was to do a spinal tap or use an expensive brain scan that required injecting a radioactive tracer and is only performed at specialized centers.

The US Food and Drug Administration in Mayapproved flortaucipir, or AV-1451, as the first drug used to image the presence of tau tangles. And the first blood test that can be used in clinic by physicians to measure amyloid proteins Aβ42 and Aβ40 became available in most US states in October.

Advances in behavioral and lifestyle interventions for dementia continued in 2020. The National Institute on Aging has over 100 nondrug clinical trials in progress exploring the role of diet, exercise and sleep. The Alzheimer’s Association reported on studies ofsupplements — such as benfotiamine, a lab-made version of vitamin B1, and a drink that boosts ketones in the blood and brain — and their effectiveness at slowing early cognitive decline.

The American Heart Association nominated a “game-changing” development in the fight against heart and kidney disease associated with diabetes as a top health advance for 2020. Diabetes is a major cause of blindness, kidney failure, heart attacks, stroke and lower limb amputation.

In addition to managing blood sugars, the two newer classes of medications used to treat Type 2 diabetes — SGLT2 inhibitors and GLP-1 RAs — can “safely and significantly reduce the risk of cardiovascular events and death,” said the AHA in a statement.

The drugs were also shown to “reduce hospitalization and slow the progression of chronic to end-stage kidney disease including the risks of dialysis, transplantation or death,” the AHA said.

A clinical trial published in March showed promise for the investigational drug vericiguat in helping people with worsening heart failure and reducedejection fraction, a measure of how much blood the left ventricle pumps out with each contraction.

About 6.2 million adults in the US have heart failure, according to the US Centers for Disease Control and Prevention.

“This is an important treatment breakthrough for a group of patients with limited options and who are growing in number,” said Nicole Napoli, the director of media relations for the American College of Cardiology.

The Endocrine Society said its members were “thrilled to finally have a treatment” for the rare but debilitating disorder.

Moms and Dads, listen up: If you missed this story, you’ll want to get the full treatment. The FDA approved a drug for head lice in adults and children older than 6 months. The drug, abametapir, or XEGLYZE, is applied as a lotion to dry hair and rinsed with warm water in about 10 minutes.

The lotion was shown in clinical trials to be about 80% effective in ridding the hair of lice compared to 50% from a placebo. XEGLYZE is a welcome addition to the lice-treatment arsenal as many lice have become resistant to existing treatments.

Between 6 million and 12 million cases of head lice occur in children 3 to 11 years of age in the US, according to the US Centers for Disease Control and Prevention.

The FDA in November recognized sesame seeds as a common allergen, calling upon manufacturers to voluntarily add a warning to products that contain the seeds.

Over a million people in the United States have an allergy to sesame, and it is “among the 10 most common childhood food allergies,” according to the National Institutes of Health. Reactions can be severe, the NIH warns.

Food allergy consumer advocates have been petitioning Congress and the FDA to mandate the warning on labels, instead of leaving it up to the companies, so expect to hear more about this issue in 2021.

Fell by the wayside

Despite these advances, a number of important public health issues fell out of the spotlight during 2020.

Human immunodeficiency virus (HIV): International progress toward bringing the HIV epidemic under control was blown “completely off track” by the novel coronavirus, according to the World Health Organization. In the US, for example, spring 2020 saw a 75% drop in people starting PrEP, or pre-exposure prophylaxis, the medicine designed to prevent people at risk for HIV from getting the disease from sex or needles using for drugs.

Reduced access to care: Fear of the novel coronavirus — and a wish not to overwhelm doctors and hospitals deluged with Covid-19 patients — kept many people from seeking basic health care. By the first of July, “an estimated 41% of U.S. adults had delayed or avoided medical care including urgent or emergency care (12%) and routine care (32%)” due to Covid-19, the CDC said.

This was especially devastating for people with chronic and progressive illnesses, such as cancer. Nearly 80% of people experienced some delay in care for their cancer due to the pandemic, a study found. Delays in breast and colorectal cancer screenings and treatment may cause an additional 10,000 deaths over the next decade, the report estimated.

Increase in overdose deaths: A lack of access to care also impacted the fight against drugs. A new CDC report found the US had the largest number of fatal drug overdoses ever recorded during the 12-month period that ended in June.

The CDC said most deaths occurred when access to care was limited or closed during lockdowns to control the coronavirus pandemic.

Health impact of climate change: The Clean Air Act celebrated its 50th anniversary this year, but the celebration was marred by wildfires that endangered lung health and the loss of a number of environmental safeguards.

“The Trump administration has attempted to roll back more than 100 public health and environmental safeguards, many of which protected our communities from dangerous air pollution,” said Dr. Albert Rizzo, chief medical officer of the American Lung Association, via email.

“This has included repealing the first-ever limit on carbon pollution from existing power plants, undermining cleaner cars standards and the authority of states to address tailpipe pollution and attempting to undermine protections from toxic mercury pollution,” he said.

The association’s 2020 “State of the Air” report found “nearly half of Americans live in areas with unhealthy air quality,” which is made worse by climate change.

E-cigarette use by teens: Use of e-cigarettes is still a health concern, especially among young people, yet the topic has “basically fallen off the radar since Covid-19” arrived, said the American College of Cardiology’s Napoli.

That’s disturbing, since a recent study found young people who have vaped are up to five times more likely to test positive for Covid-19, said the ALA’s Rizzo.

“Many vape every day or nearly daily, underscoring the highly addictive nature of nicotine, which is harmful to developing brains,” Rizzo said.

Health care disparities: While people of color and marginalized communities have long failed to receive equal access to quality health care and treatment, the deadly impact of those inequities was never starker than during the pandemic.

Americans live in a country where “access to health care depends on where you live and work,” Dr. Richard E. Besser, former acting CDC director and president and CEO of the Robert Wood Johnson Foundation, wrote in an editorial for CNN.

“This sad truth is not new, but it has been put on display during a pandemic that has served as both an illustration and an accelerant of the unequal opportunities and systemic barriers that leave Black, Hispanic and Native Americans exposed and disproportionately vulnerable.”