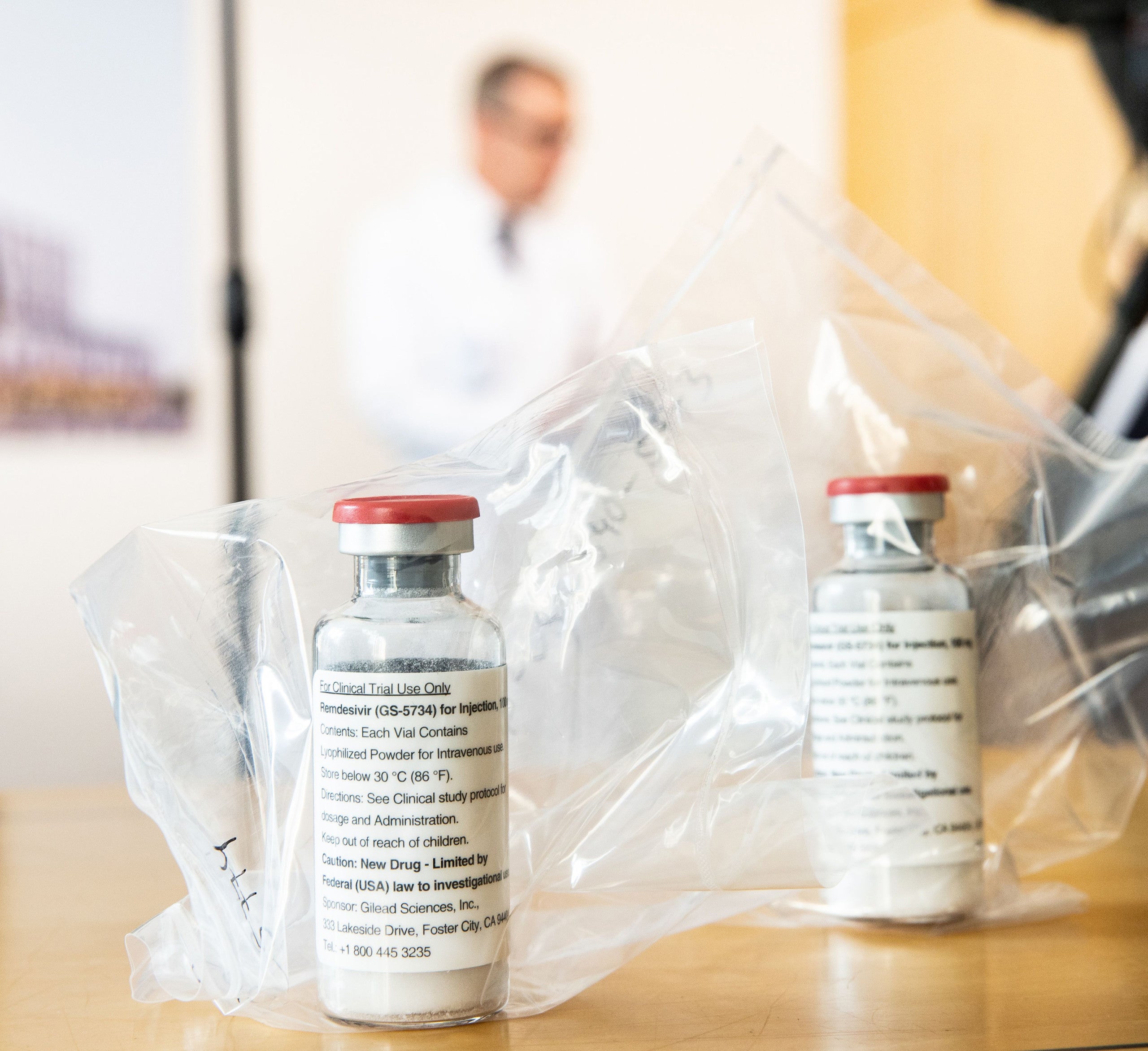 Vials of the drug Remdesivir lie during a press conference about the start of a study with the Ebola drug Remdesivir in particularly severely ill patients at the University Hospital Eppendorf (UKE) in Hamburg, northern Germany on April 8, 2020, amidst the new coronavirus COVID-19 pandemic. (Photo by Ulrich Perrey / POOL / AFP) (Photo by ULRICH PERREY/POOL/AFP via Getty Images)
by: Maggie Fox, CNN
Posted: May 22, 2020 / 08:25 PM EST / Updated: May 22, 2020 / 11:25 PM EST

(CNN) — Researchers have finally published the data that led the federal government to recommend the use of the antiviral drug remdesivir in very ill coronavirus patients, and they say the drug alone will not be enough to help patients.

The data, published in the New England Journal of Medicine, show the drug shortened the course of illness from an average of 15 days to about 11 days.

“Preliminary results of this trial suggest that a 10-day course of remdesivir was superior to placebo in the treatment of hospitalized patients with Covid-19,” the researchers wrote. But it was not a cure and it did not act quickly.

“These preliminary findings support the use of remdesivir for patients who are hospitalized with Covid-19 and require supplemental oxygen therapy,” the researchers, led by a team at the National Institute of Allergy and Infectious Diseases, wrote.

“However, given high mortality despite the use of remdesivir, it is clear that treatment with an antiviral drug alone is not likely to be sufficient,” they added. “Future strategies should evaluate antiviral agents in combination with other therapeutic approaches or combinations of antiviral agents to continue to improve patient outcomes in Covid-19.”

Other teams are already combining antiviral drugs, including remdesivir, with immune modulating drugs in coronavirus patients. The NIAID says it has started a trial that compares remdesivir alone to remdesivir combined with the anti-inflammatory drug baricitinib, used to treat rheumatoid arthritis.

Late last month, the federal government announced that the drug was helping and the US Food and Drug Administration gave remdesivir an emergency use authorization to treat COVID-19.

“Even though the trial was ongoing, the data and safety monitoring board made the recommendation to unblind the results to the trial team members from the NIAID, who subsequently decided to make the results public,” the researchers wrote.

“Given the strength of the results about remdesivir, these findings were deemed to be of immediate importance for the care of patients still participating in the trial as well as for those outside the trial who might benefit from treatment with remdesivir.”

The study’s findings were considered significant because it was the first double-blind, placebo-controlled trial to test the drug in patients. That means some patients got no drug, and neither patient nor doctors knew who was getting the real treatment.

But some critics complained that the data were not published and worried the federal government was rushing the results.

The team tested 1,063 patients. They found those who got the infused drug recovered after an average of 11 days. Those who got placebo treatment took 15 days on average to recover. As previously reported, 7% of patients who got remdesivir died, compare to 11.9% given placebo infusions. But those results were not statistically significant.

Patients who needed oxygen appeared to benefit the most from the drug, the researchers reported.

Remdesivir did not cause an excess of side-effects and appeared safer than placebo, they added.

“Forty-nine patients had remdesivir treatment discontinued before day 10 because of an adverse event or a serious adverse event other than death (36 patients) or because the patient withdrew consent (13 patients),” the team wrote.

It was a serious challenge to launch a clinical trial in the middle of a pandemic, the research team said.

“The trial was implemented during a time of restricted travel, and hospitals restricted the entrance of nonessential personnel,” they wrote.

“Training, site initiation visits, and monitoring visits often were performed remotely. Research staff were often assigned other clinical duties, and staff illnesses strained research resources. Many sites did not have adequate supplies of personal protective equipment and trial-related supplies, such as swabs. However, research teams were motivated to find creative solutions to overcome these challenges.”

The study is still ongoing. “Our preliminary report is intended to help inform clinicians considering the use of remdesivir,” the researchers wrote. “We are awaiting final visits, data entry, monitoring, and data lock for the last of the 1,063 patients enrolled, after which an update of the results will be provided.”