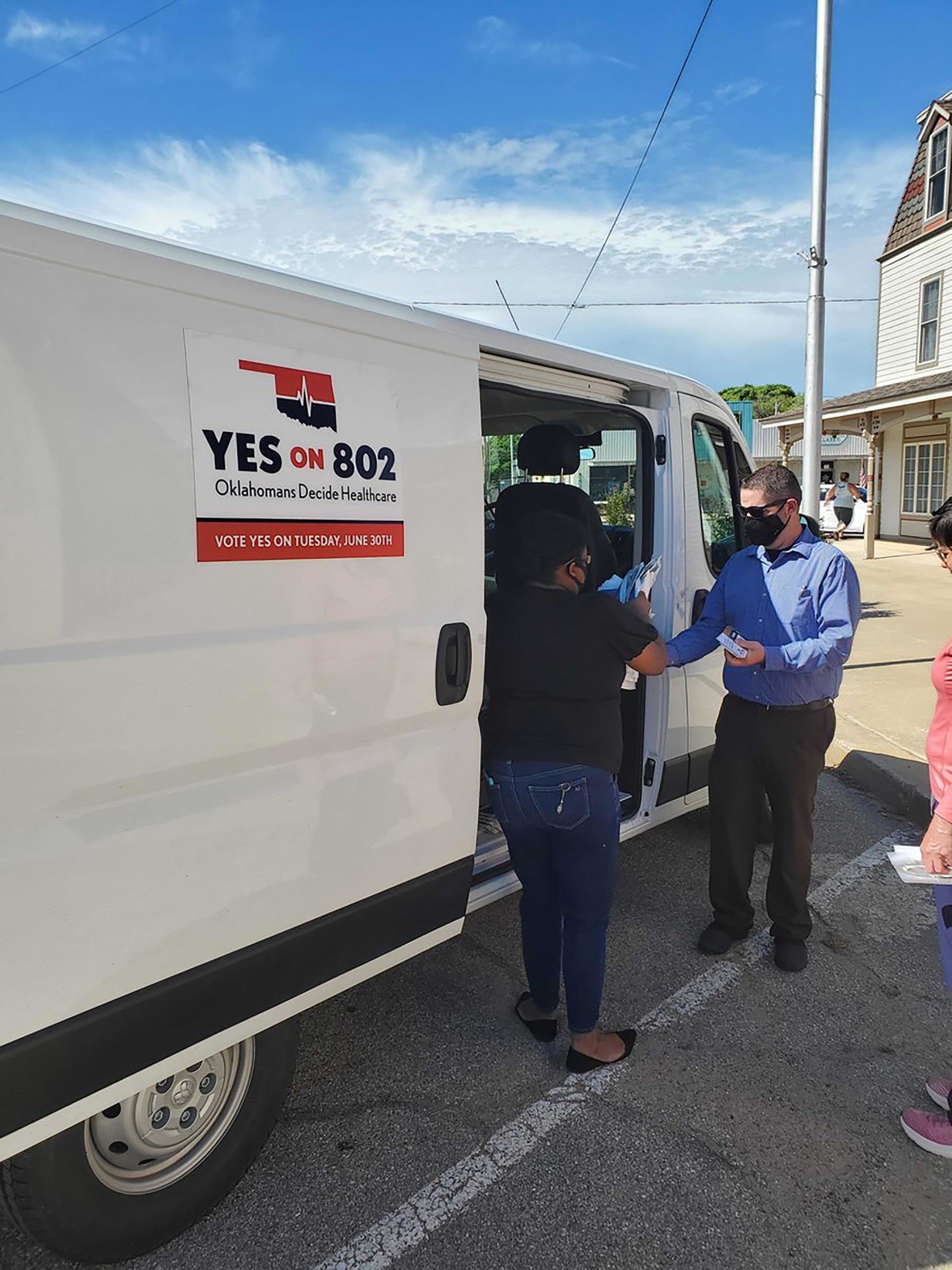 The ballot initiative, which began long before the coronavirus pandemic but took on increased urgency amid the outbreak, passed narrowly with a majority of 50.5%, a margin of about 1 percentage point.

It calls for enshrining Medicaid expansion in the state constitution. The goal is to prevent legislators from enacting rules that could make it more difficult to qualify for coverage, such as work requirements — a tool favored by President Donald Trump and many Republicans to shrink the program.

Nearly 200,000 low-income adult residents are expected to gain health insurance. Expansion is also estimated to bring a little more than $1 billion additional federal funds annually to Oklahoma, said Amber England, the initiative’s campaign manager. The state will have to pick up 10% of the cost.

Oklahoma becomes the fifth state run by Republicans to approve expansion, a provision of the Affordable Care Act, at the ballot box. Maine was the first, in 2017, followed by Nebraska, Utah and Idaho a year later.

In all of the prior efforts, elected officials delayed implementation or attempted to add restrictions to the program. Medicaid expansion has yet to start in Nebraska, but tens of thousands of people have enrolled in each of the other states.

Missouri residents will vote on adding Medicaid expansion to the state constitution on August 4. And advocates have their eyes on Florida for 2022, said Jonathan Schleifer, executive director of The Fairness Project, which has helped organize the ballot campaigns.

Some 14 states, all with either Republican governors or GOP-led legislatures, have yet to adopt Medicaid expansion, which began in 2014 and covers low-income adults with incomes up to roughly $17,000 a year. More than 2 million Americans fall into this so-called coverage gap, according to the Kaiser Family Foundation.

Oklahoma has the second highest uninsured rate in the nation, behind only Texas. Some 14.2% of Sooner State residents lacked coverage in 2018, according to the latest Census Bureau data available.

Titled “Yes on 802 Oklahomans Decide Healthcare,” the ballot initiative garnered a record 313,700 signatures, with people in all 77 of the state’s counties supporting it. A $2 million television, radio and digital ad campaign has run for the past six weeks, England said. Also, organizers held more than a dozen Zoom happy hours, drove a bus to 21 cities, mailed postcards and hung signs on doors.

“Everybody in the state — whether you live in a rural community or you live in an urban area — you know of someone who doesn’t have health care and won’t go to the doctor,” England said, adding that expansion is expected to help cash-strapped rural hospitals, which frequently must treat uninsured patients.

In an unusual twist, Oklahoma Republican Gov. Kevin Stitt applied to expand Medicaid in April but included a work requirement and premiums of up to $15 a month for families. However, the next month he vetoed an increase to a hospital fee that would have helped fund the measure. He noted that it would not fully pay for expansion because the pandemic fueled a surge in unemployment that would have increased the number of Medicaid enrollees.

Stitt also backed the Trump administration’s effort to curtail Medicaid by allowing states to ask for a set amount of federal financing for part of their programs in exchange for more local control. The governor attended an unveiling of the administration’s so-called block-grant guidance in January, saying he intended to be among the first to apply.

Neither the governor’s office nor the state Health Care Authority responded to requests for comment.