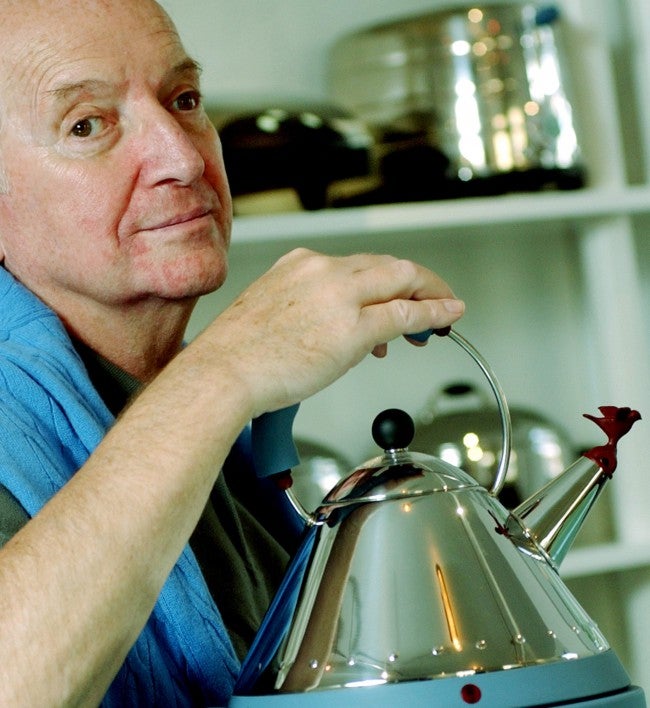 TRENTON, N.J. (AP) – Celebrated architect Michael Graves, who created whimsical postmodern structures and later became well known to the masses for designing products for people with disabilities and household goods such as whistling Alessi teakettles and stainless steel colanders for sale at Target and other stores, died Thursday. He was 80.

He made his name in the 1980s as one of the popularizers of a new kind of architecture, admirers of his work said.

“Michael Graves was a kind of giant of the period of architecture called postmodernism, when architects around the 1980s looked back to European design precedence,” said Pauline Saliga, the director of the Society of Architectural Historians. “They kind of rejected the sterility of modernism. They were looking for other design inspirations.”

Graves designed buildings all over the world. But his most famous may be The Portland Building, the city administrative building in Portland, Oregon, and The Humana Building, a 26-story skyscraper in Louisville, Kentucky.

Those buildings, which opened in 1982, and others used a variety of colors and shapes and have sometimes eccentric juts in and out a little like Lego creations.

Graves also designed a campus master plan for Rice University in Houston, the Swan and Dolphin Resort at Walt Disney World and the scaffolding for the Washington Monument when it was renovated in the late 1990s so it would remain attractive throughout the work.

President Bill Clinton awarded him the National Medal of Arts in 1999, and the American Institute of Architects gave him its gold medal, the highest award for an architect, in 2001.

Chicago-based architect Stanley Tigerman, a contemporary and friend, called Graves one of the best-known postmodernists.

“He brought back imagery and symbolism,” Tigerman said.

Later in life, Graves started designing signature household items such as teakettles and colanders for Target, and he added a line at JCPenney. Those items brought a famous architect into the kitchens and bathrooms of millions of homes.

Graves’ Alessi kettle, featuring a spout with a bird that sings when the water boils, is part of a series of popular Alessi-style items including pitchers and kitchen timers.

In 2003, Graves was paralyzed from the waist down from an infection. He used a wheelchair for the rest of his life.

After the illness, he began a third career, designing for people with disabilities. He designed items including a wheelchair, heating pads and bathroom handrails and accessible homes for the Wounded Warrior Project.

He said in 2009 he liked his designers to spend time in wheelchairs while working on certain products so they’d know what it’s like.

“That understanding of being in the wheelchair and strapping you in and not being able to get out of it is a very, very good experience,” he said.

He was recognized by another president for this work when President Barack Obama named him to the United States Access Board in 2013.

Graves, born in Indianapolis, studied architecture at the University of Cincinnati and Harvard University. He won the Rome Prize in 1960 and spent two years studying in Italy.

After he returned to the U.S., he began a four-decade career teaching at Princeton University.

His firm, Michael Graves Architecture & Design, based in Princeton and New York, said it would carry forward his traditions.

“Of all of his accomplishments, Michael often said that, like his own family, his proudest creation was his firm,” it said in a statement. “As we go forward in our practice, we will continue to honor Michael’s humanistic design philosophy through our commitment to creating unique design solutions that transform people’s lives.”