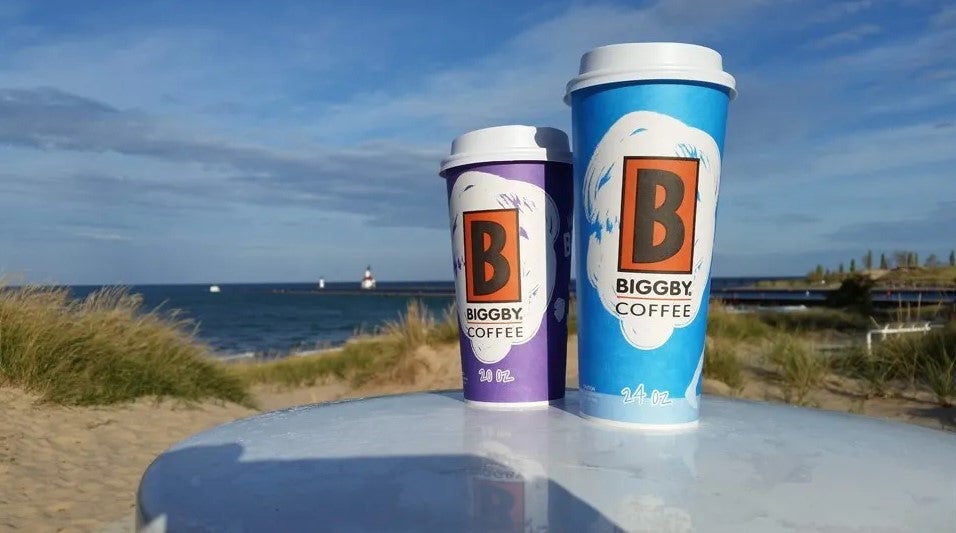 INDIANAPOLIS (Inside INdiana Business) — A regional coffeehouse chain is expanding its footprint in Indiana and projections are for continued growth.

Michigan-based Biggby Coffee has 12 franchised locations in the state, most are in northwest Indiana, the South Bend-area and Fort Wayne.  There’s also a cafe in Plainfield.

McFall tells Inside INdiana Business another 14 stores are in active development in Indiana, meaning a franchisee has a signed contract to open a cafe. Another 20 locations are under “serious consideration.”

“We have more stores under development in Indiana than we actually have open which is a pretty powerful number,” McFall said.

In addition to Indiana and its home base of Michigan, Biggby also has stores in seven other states; Florida, Illinois, Kentucky, Ohio, South Carolina, Texas, and Wisconsin, totaling about 230 locations.

For comparison, there are 221 Starbucks cafes in Indiana, according to a food publication website, SpoonUniversity.com.

McFall says Biggby doesn’t want to be the biggest coffee chain, but it does want to be the “best in the neighborhood” by building its community through franchising.

The company says the cornerstone of its business model is the area representative (AR) program it started in 2018.

This program allows multi-unit owner/operators to grow the Biggby Coffee brand by recruiting potential franchisees in their designated market.

The AR, who is based in the region, plays the role of mentor for new owners.

“They perform locally a lot of what we typically do for our owner-operators,” said McFall.

McFall says the AR model is a solution to one of the company’s biggest struggles; creating and supporting open stores in remote regions.

“I know this might not sound right to you, but it would be hard on us emotionally, because, you’d have these owner-operators that are out there, in the middle of some market that we don’t know that much about, and it was hard to support them,” said McFall.

McFall’s emotional attachment to the company extends back to 1996 when he was a barista in a Michigan coffee shop that eventually became the No. 1 Biggby store.

Using that nearly 25 years of experience as a base, McFall wrote his first book, which was published this past summer. It offers what McFall calls practical tips and acts to successfully start and run a business.