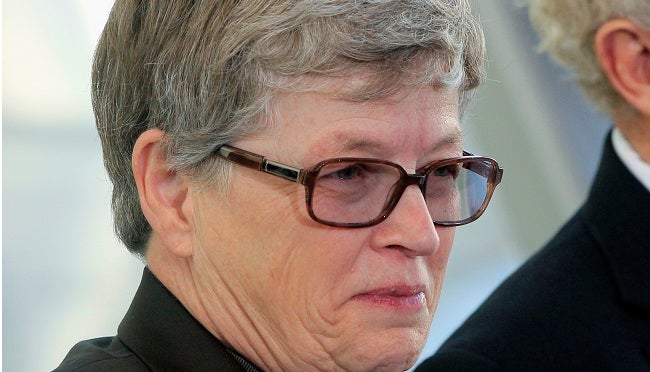 Simon is stepping down in the wake of a scandal involving Larry Nassar, who worked at Michigan State as a medical doctor. Nassar was sentenced Wednesday to 40 to 175 years in prison for molesting young girls and women under the guise of medical treatment.

Many of the victims accused the university of mishandling past complaints about Nassar. More than 160 women and girls gave victim impact statements in court.

Simon released a statement, saying as tragedies are politicized, blame is inevitable and acknowledged she was a natural focus of the anger as president.

Simon, who earned her doctorate at Michigan State in 1974, was promoted to school president in 2005.

“I think that Simon resigning is the great first step,” Jessica Smith, sex abuse survivor, said. “I however am having a little bit of trouble with the fact that she will still be affiliated or still be able to pull strings and have connections. I don’t think that is best for the institution.”

“We’re hurt. We stand with the survivors going forward and now we have to make sure everyone is at the table talking about how we’re gonna make it right for the Spartans of tomorrow,” Lorenzo Santivicca, MSU Student Body President, said.

Sen. Curtis Hertel Jr., a Democrat from East Lansing, where the campus is located, called Simon’s resignation “an important step in moving the university forward.” He says a culture needs to be created at Michigan State “where survivors are listened to and believed.”

Hertel, a Michigan State graduate, says Simon’s “actions did not meet the leadership that we need at Michigan State” and that further investigating needs to be done to determine who “had reports and didn’t act” beyond the president’s office.

Nassar’s victims also pointed the finger at Indianapolis-based USA Gymnastics for allowing the abuse to continue. Just minutes after the sentencing, the U.S. Olympic Committee released a letter calling for the resignation of all board members at USAG.

The committee’s chief executive Scott Blackmun said it’s members will cut ties with USAG completely if it doesn’t “fully embrace the necessary changes in their governance structure along with other mandated changes.”

Earlier this week, three top USA Gymnastics board members resigned. Those include Chairman Paul Parilla, Vice Chairmain Jay Binder, and Treasurer Bitsy Kelley, but Blackmun says that is not enough. There are 18 other remaining board positions within USAG.

In response to the demands from the USOC, USA Gymnastics released the following statement:

USA Gymnastics supports the United States Olympic Committee’s letter and accepts the absolute need of the Olympic family to promote a safe environment for all of our athletes. We agree with the USOC’s statement that the interests of our athletes and clubs, and their sport, may be better served by moving forward with meaningful change within our organization, rather than decertification. USA Gymnastics supports an independent investigation that may shine light on how abuse of the proportion described so courageously by the survivors of Larry Nassar could have gone undetected for so long and embraces any necessary and appropriate changes. USA Gymnastics and the USOC have the same goal – making the sport of gymnastics, and others, as safe as possible for athletes to follow their dreams in a safe, positive and empowered environment.

In addition, the US Olympic Committee wrote in the letter they are launching an investigation by an independent third party to find out who knew what and when in relation to Nassar’s abuse of athletes. The committee also is offering to pay for treatment and counseling for the survivors.