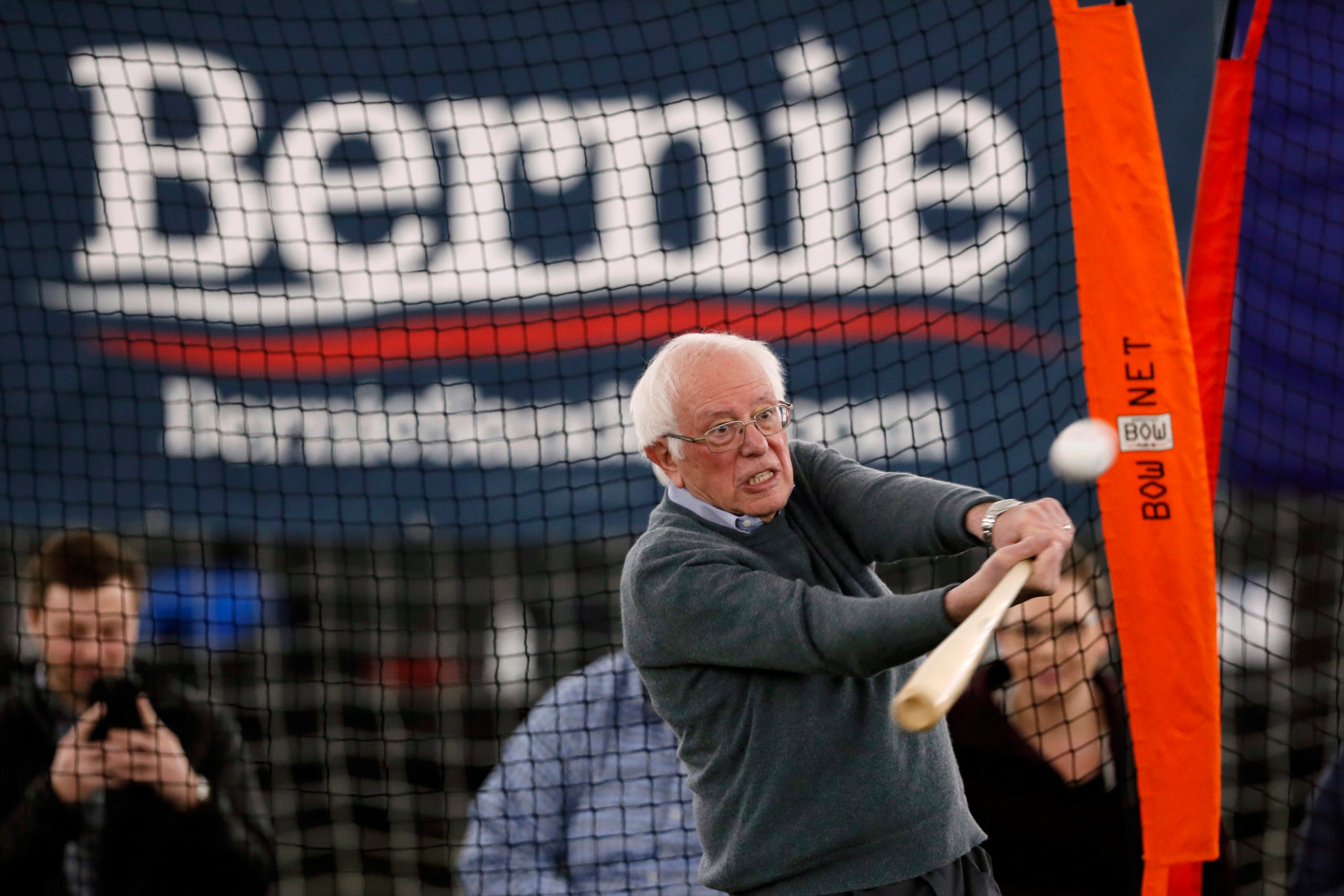 BURLINGTON, Iowa (AP) — Take Bernie out to the ball game?

Bernie Sanders, the Vermont senator and Democratic presidential candidate, is aggressively opposing a Major League Baseball plan to cut 42 minor league teams across the country after 2020. Among the targeted are the Vermont Lake Monsters, the Single-A affiliate of the Oakland Athletics in his hometown, Burlington.

Sanders briefly took batting practice Sunday on an indoor turf field as representatives from three small-town Iowa teams looked on: the Quad City River Bandits, the Clinton LumberKings and the Burlington Bees, the local club in this town on the Mississippi River. In August, Sanders played softball with reporters on the state’s corn field-ringed “Field of Dreams,” the set of the Hollywood hit of the same name. And he has tapped a former Harvard second baseman, Faiz Shakir, to run his campaign.

Sanders shed his signature suit jacket to take swings in a sweater over a dress shirt. With a staff member slow-pitching, the senator dribbled a few grounders to his left, then lifted a ball in the air in the same direction, before joking that he was aiming another grounder off his bat at CNN reporter who should have dived to stop it. After about six hits, he dropped the bat and said “OK, that’s it.”

“For all the major league scouts, if I don’t make it to the presidency, I’m available,” Sanders joked.

Taking the diamond demonstrated physical stamina for a 78-year-old who recently had a heart attack, while also letting Sanders press a larger political point about rich owners putting profits ahead of the national pastime. But it also shows off a softer side of someone most known to supporters and detractors alike for being a democratic socialist and backing progressive policy proposals such as “Medicare for All.”

“The guys who own the teams are billionaires,” Sanders said told The Associated Press interview earlier this week, adding that baseball “is not an institution that is hurting financially. And you can see that by, just in the last few weeks, seeing major league teams signing star baseball players for as much (as) $324 million.”

MLB is negotiating a new agreement with the National Association of Professional Baseball Leagues, the governing body of the minors. The initial contraction proposal primarily would impact lower-level teams in short-season leagues. Sanders met last month with Commissioner Rob Manfred to decry the plan and the senator sent him a letter Saturday, arguing that baseball “has to be considered more than just the bottom line.”

“Baseball is not just another business,” Sanders said during the interview. “There’s a reason the president of the United States throws out the first pitch of the season, why baseball is considered a national pastime.”

After the initial Sanders-Manfred meeting, MLB issued a statement saying it “understands that we have an obligation to local communities to ensure that public money spent on minor league stadiums is done so prudently and for the benefit of all citizens.”

But it added: “MLB also must ensure that minor league players have safe playing facilities suitable for the development of professional baseball players, are not subjected to unreasonable travel demands, are provided with compensation and working conditions appropriate for elite athletes, and have a realistic opportunity of making it to the major leagues.”

Some minor league players have filed a federal class-action suit charging that many players earn less than $7,500 per year, violating minimum wage laws.

More than 100 members of Congress from both parties have signed a separate letter to Manfred opposing shutting down minor league teams. So far, though, Sanders is alone among the Democratic presidential hopefuls loudly opposing the idea.

“He’s the only one I hear talking about it,” said J.D. Scholten, who pitched professionally in Canada and for Iowa’s independent Sioux City Explorers. Scholten challenged longtime Republican Rep. Steve King in 2018 and is trying again to unseat him.

“I think it kind of fits into his overall message of, right now, a lot of the way our lives are being shaped by wealthy people who are dictating a lot of these things at the top, and the people at the bottom are being left behind,” said Scholten, who also played basketball this past week with another White House hopeful, businessman Andrew Yang.

Sanders said before Sunday’s batting practice that Congress could intervene if baseball goes through with its contraction plan. He noted the sport’s antitrust exemption and the public dollars some teams have received to build stadiums, and cited lucrative television contracts that he said are “sometimes designed in unusual ways.”

“So I think there is a lot Congress can do to protect baseball for ordinary Americans and I think that is what you’re going to see being done in a bipartisan matter,” Sanders said. “I hope it doesn’t have to come to that.”

Scholten said he tells crowds at town halls while campaigning that he’ll answer questions about anything, including baseball.

“My baseball background gets talked about quite a lot. I’m actually kind of surprised. I haven’t played in 10 years, was a paralegal for a decade and nobody talks about that,” Scholten joked.

Sanders’ baseball ties predate his 2020 campaign. He visited with the Los Angeles Dodgers during spring training in 2018 and, as he was recovering at home following his Oct. 1 heart attack, Sanders’ campaign released video of the candidate batting balls around his backyard.

The senator grew up loving the Brooklyn Dodgers until they moved to Los Angeles when he was 16. He now roots for the Boston Red Sox, like a lot of New Englanders.

While running for the first elected office he won, mayor of Burlington in 1981, Sanders says he thinks he remembers campaigning on landing a minor league team. He says “we worked extremely hard” to accomplish just that.- bringing a Cincinnati Reds affiliate to town three years later.

“Everybody found it amusing because the name was the Vermont Reds,” Sanders, noting his proud leftist streak, chuckled.

This story has been corrected to reflect that Sanders’ campaign manager, Faiz Shakir, played baseball at Harvard, not Yale.