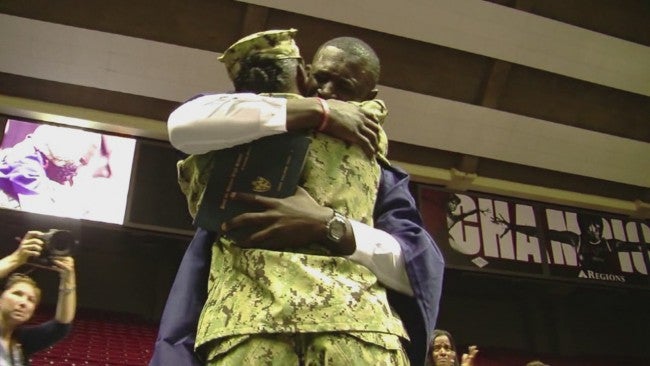 But this one was a little different.

One by one names were called, and students walked across the stage to get their diploma. Until, a pause before calling Steven Turner Jr.

“I got really worried and nervous,” Steven said. “I thought she forgot my name.”

But on stage there was more than just his diploma waiting for him. His mom, Petty Officer 2nd Class Vera Turner was there.

She has been deployed in Guantanamo Bay for the last nine months. She told her family she wouldn’t be able to attend her son’s graduation.

She planned the surprise with the school district.

“It means so much to me, it means the whole world,” Steven said. “I thought she wasn’t going to make it.”

But, she turned out to be the best graduation gift he could have received.

“All he could say was, ‘Thank you mama, thank you, I love you,'” Vera Turner said.