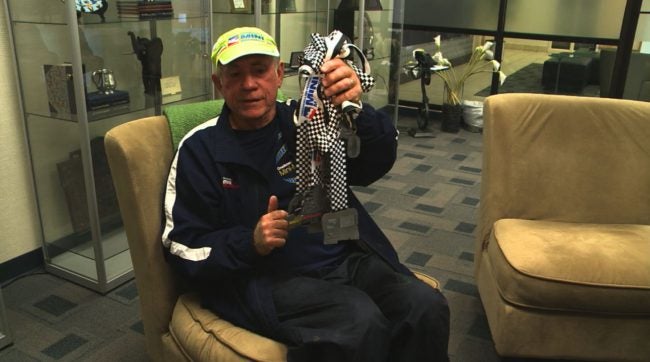 INDIANAPOLIS — The Mini-Marathon is a tradition for thousands of people in Indianapolis. Some people run, others walk and many cheer the runners on throughout the course.

For one group of runners, the tradition is extra special. The Mini-Marathon Alumni club runners have run every single Mini-Marathon.

There are only ten runners in the club this year. 24-Hour News 8 talked to three of them.

“I always liked sports and I was never good enough to make the high school team…the Mini-marathon came up and I thought that’d be nice to try,” said Leonard Outcalt.

We asked each of the men why they decided to run the very first Mini-Marathon.

“I thought, what the heck? I ran some 10Ks and I thought maybe I could jump up to a Mini Marathon,” said Bil Carter.

All three answers were similar.

“I thought I wonder if I can run 13 miles,” said Terry Hannigan.

Terry, Leonard and Bil stumbled into the inaugural Mini Marathon back in 1977.

None of them are quite sure how it turned into a tradition.

“I just didn’t think about it. Just every year signed up and ran it,” said Carter.

Forty years later, they’re each getting ready to run their 40th Mini.

“It just happened! I wasn’t no runner. I’m still not a runner,” said Outcalt.

Hannigan, on the other hand, is a runner at heart. He purchased his home for the basement, where 40 laps make a mile.

The Alumni Club runners have been in every single race since 1977. Outcalt remembered the first race cost $4.00 to participate.

They’ve seen the Mini evolve from a race with about 800 runners, into the spectacle it is today.

We asked what was the biggest difference between now and then. They all mentioned the course.

“Thankfully, we no longer have to go up the Coffin golf course hill. It’s a flatter course,” said Carter.

Years ago, the Mini used to be at the very end of May and they said the heat still haunts them.

“One day the temperature was almost 90 degrees. It’s amazing no one died. It was the hottest race,” said Hannigan.

“When my wife went with me one year it was in the 80’s and she got so hot. As we were going down the track she seen a filling station up ahead and she had me go up there and get her a candy bar,” said Outcalt.

“I was running fast enough I ripped the side of my shoe out,” said Hannigan.

“The years kind of catch up with you,” said Carter.

The number of runners could get smaller still.

“I’m 78 now and it’s getting close to time to quit anyway,” said Outcalt.

Then again, maybe not.

“My joke is I’m going to be hit by a meterorite and die at 100. So my expectation is that I will run the mini before the meterorite hits me,” said Hannigan.

Next, they said to start hydrating on Friday. Finally, take it all in and enjoy the tradition.