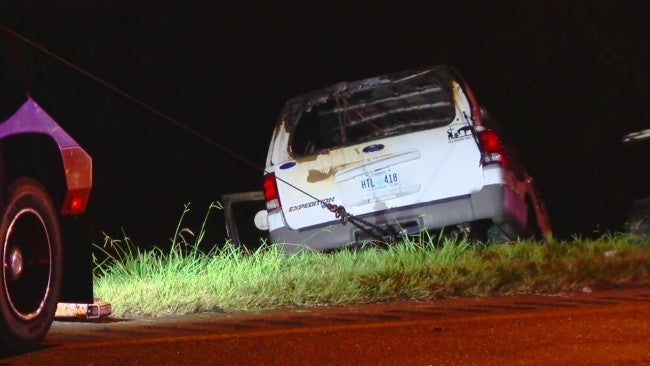 JACKSON, MS (WJTV) – On Monday, a crash claimed the life of Anthony Boone, but not before a Jackson police officer did everything he could to save the man from the fiery crash. When he couldn’t, he was simply there for him.

Sergeant William Bright says he tried his best to save Anthony’s life. When he realized there was nothing in his power that could be done, he wanted to let that man know he was not alone.

“I think the good Lord knows that I tried everything that I was humanly able to do,” says Sgt. Bright.

Since early Monday morning, Sergeant William Bright has been stuck with a painful memory. He says he did everything he could to save 37-year-old Anthony Boone, but the situation was beyond his control.

“We went through probably 8 to 10 fire extinguishers. I kept spraying them on the dash and his leg area, but the heat, it was so hot. The fire just wouldn’t go out,” he said.

Sgt. Bright says at one point the flames grew above his head.  Despite his own fears, he stayed with that man; talking with him and praying, until he took his last breath.

“Of course I’m speaking to the good Lord. I got there on my knees. I grabbed his hand and he grabbed mine. We were just squeezing hands together.”

“…I just praise God for his (Sgt. Bright’s) profession and all the other men and women out there who are in law enforcement who put their lives on the line every day,” said Sheekas Brown, Sgt. Bright’s wife.

But this sergeant says don’t go calling him a hero. He believes he was doing exactly what he took an oath to do. To protect and serve.

“I had never met that man before. I didn’t even know him, but he was a human being. So it was my job to do what I did,” says Sgt. Bright.

Sergeant bright says he’s hoping the victim’s family sees this story and realizes that he tried his best. He says if any of them have any questions or want to talk to him about what happened, feel free to reach out.