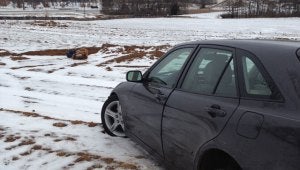 FRANKLIN, Tenn. (WKRN) – A photographer 30 minutes outside of Nashville, Tenn. was taking photos last Friday when he made a startling discovery: an elderly woman frozen to the ground.

He said he wanted photographs of the snow before everything melted away when he saw the car.

“I was going to come over here and get a picture of the car and the license plate just for the church to have in case they had any questions,” he told News 2.

It was that moment when he noticed something unusual through his lens: an elderly woman lying on the ground.

“She was lying right there against that dirt bank and she blended in, had a brown coat on and it looked just like the dirt,” Sheldon explained.

It was around 9:30 a.m. and the temperature was only around 12 degrees.

“I was here at the car, and I was yelling at her, ‘Hello? Can you hear me?’ and I got no response,” the photographer told News 2.

Sheldon said the woman was lying on her side in the fetal position with her hands tucked into her sweater. She was also covering the bottom of her face, signs he said told him she was very cold.

The woman, 74-year-old Patricia, whose last name won’t be released, was alive but disoriented, declining his help.

Sheldon immediately called 911 and stayed with the woman, who is from Bellevue, until paramedics arrived 10 minutes later.

Franklin police told News 2 Patricia was transported to a nearby hospital, treated for hypothermia and released a short time later.

Her family told News 2 the 74-year-old, who suffers from a brain dysfunction, had been missing for two days. They’d filed a missing persons report.

They also said they are more than grateful that Sheldon found their loved one.