Mitch Daniels caught on camera being stopped for speeding 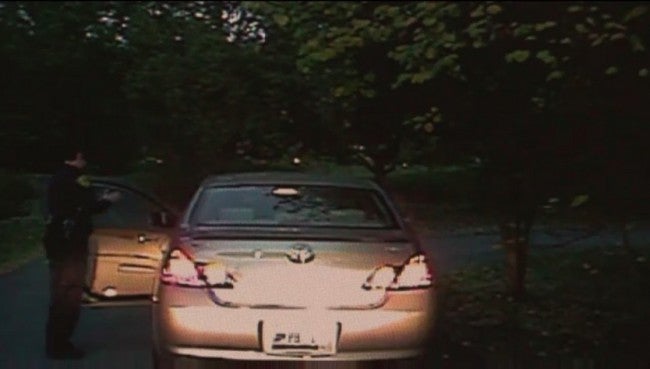 Dashcam video shows how the President of Purdue University broke a pair of traffic laws on the morning of Oct. 20 and got away with it.

The video shows the car driven by Daniels streaking down Third Street in West Lafayette.

At the corner of Third Street and McCormick Road, Daniels fails to come to a full stop at the stop sign as the flashing lights come on.

Instead of pulling over immediately, Daniels pulls into the drive at Westwood Manor, the President’s home, where the car comes to a stop.

Daniels opens the door as the officer approaches.

“Good morning, sir,” said Lt. Lesley Wiete. After Daniels says hi, she asked, “Do you know why I stopped you?

The quick trip, Daniels explains, was to retrieve a phone he left behind. He said he was expecting an important call.

“I apologize,” said Daniels. “Believe me, you’re doing exactly what you’re supposed to do.”

No citation was issued. There was no written warning either.

Warning for speeding. Good job PUPD for usual alertness. Note to self: Don’t lv cell ph at home on nightstand when expecting an 8 AM call- Mitch Daniels (@purduemitch) October 22, 2015

A spokesman for the Purdue Police Department says Lt. Wiete operated within policy. That policy calls for officer discretion in the case of a traffic stop.