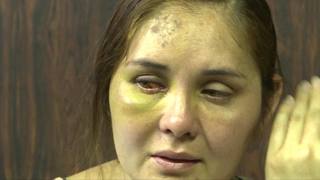 PASSAIC, N.J. (WPIX/CNN) – A 13-year-old boy has been charged after he allegedly assaulted a mother and her son on a New Jersey street in what the victims say was a hate crime.

Beronica Ruiz says she doesn’t feel safe after the June 19 attack. Pushing her 1-year-old in a stroller, the mother was walking her sons home from school when prosecutors say she was attacked by a 13-year-old boy.

The 13-year-old is allegedly a bully, who first targeted Ruiz’s 12-year-old son at Passaic Gifted and Talented Academy Public School No. 20.

During the attack, he reportedly told the 12-year-old to go back to Mexico then punched Ruiz in the face, knocking her unconscious.

The mother suffered a concussion and fractured eye socket. Her 12-year-old son was also allegedly struck in the face.

Prosecutors charged the suspect with one count each of aggravated assault and simple assault, and he was released to his parents, pending a court appearance.

However, Ruiz and her family believe the attack was a hate crime.

Alfonso Vasquez, Ruiz’s husband, says his son was threatened with violence the day before the attack after an argument in the school lunchroom.

“These kids were telling the Mexicans that all the Mexicans should be behind the wall,” Vasquez said. “My son told them, ‘What are you talking about? We are all immigrants.’”

The boy sought help from a teacher and was placed in a separate room for the rest of the school day for his own protection.

His parents say they were not notified about the incident, but when they talked to school administrators the next day, they were promised the situation was under control.

Then, Ruiz and her son were allegedly attacked.

The family says even after the attack, the suspect was not immediately suspended. They feel their complaints to school officials were dismissed.

The Passaic County Prosecutor’s Office is handling the investigation.