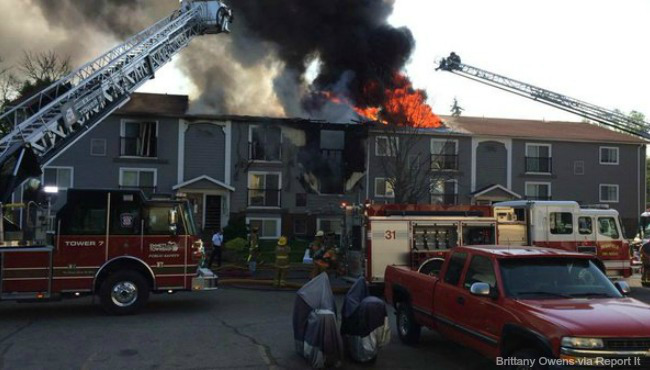 PENNFIELD TOWNSHIP, Mich. (WOOD) A woman says she had to toss her one-year-old son from a third floor balcony and jumped herself to escape a fire in Michigan.

The call came in around 8:45 a.m. Wednesday. Four fire departments were on the scene of the fire, which was in the 100 block of Hopkins Street.

“I’m like, we are not dying today. Its not our day,” said Amber Day, a resident at the apartment complex.

Day and her son Jaelen were trapped on a third floor balcony as flames ripped through the apartment complex.

Residents gathered on the ground, telling Day to drop her son.

“Just drop him. You are either going to die or just drop. You have two choices,” Ron Sides yelled to Day.

As the fire was raged around her and her son, Day did the unimaginable.

“Im crying as Im doing it. This is not something a mother would want to do, but at the same time that is something I would have to do,” said Day. “Luckily that dude was at the bottom and caught him, like caught his whole body from his head to his toe. It was crazy.”

Thankfully, people on the ground found a mattress that they pulled underneath the balcony so Day could jump to safety.

Authorities said residents were able to escape and no one was seriously injured. Crews had to rescue some residents out of the building.

Fire crews believe the fire started on the second floor.

At least half of the 24 apartments in the building are a total loss, according to fire officials.