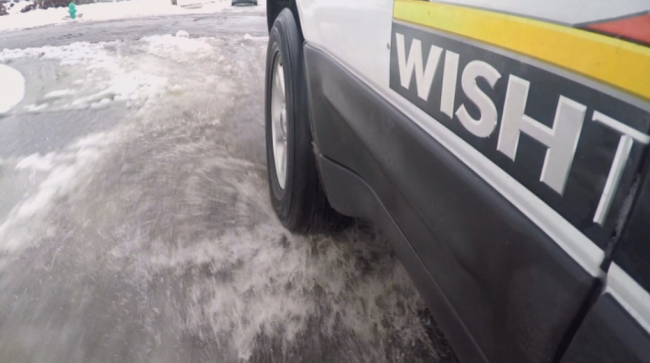 A combination of warmer temperatures and prolonged showers this week could exacerbate the impact, geologist Keith Gaskill explained.

“Everything melts and everything gets washed out all at once,” he told 24-Hour News 8. “These major rains [are] going to wash a lot of salt into the system.”

“All the chlorides can damage concrete and affect our water,” said Gaskill. “I know of a study in New Hampshire where 400 people had to re-drill wells because there was so much sodium that was getting into their drinking water that it was causing health problems.”

Effects of excessive sodium chloride in drinking water include complications with heart disease and high blood pressure, according to doctors. Highly corrosive salt can also damage pipes and water heaters, allowing metals and other toxins to leak into tap water.

Although studies show contaminants in Indianapolis tap water do not exceed federal limits, none of the residents selected at random by 24-Hour News 8 as part of a downtown survey reported feeling comfortable drinking unfiltered water from local taps.

Another longtime resident reported drinking tap water “only at restaurants” – and with great hesitation – adding he prefers to drink bottled water at home.

Although downtown resident Kali Elliott revealed she “never” drinks tap water and is concerned about contaminants, she said winter road treatment is often a necessary evil.

“If you don’t salt [the roads], you’re inevitably going to have accidents,” she explained.

Road safety may come at the expense of pet safety. The American Society for the Prevention of Cruelty to Animals (ASPCA) receives dozens of calls each year about pet exposure to ice melting chemicals, according to data from their Poison Control Center.

Symptoms of salt ingestion and contact among pets range from skin irritation to death.

Alex Ruble, an Indianapolis resident, said he was fortunate his dogs suffered only minor injuries.

“When it was [snowing and there was salt on the ground] a few weeks ago, my dogs would come in and they would be limping,” he said. “The salt was burning their paws.”

The ASPCA recommends massaging petroleum jelly or other paw protectants into paw pads before letting pets go outside.

Other unintended victims of excess road salt include wild animals. Deer may venture out to enjoy what they mistake as salt licks, landing them in highly trafficked areas and often deadly situations, Gaskill explained.

He encouraged residents, companies and officials to limit the amount of road salt used each winter to “only what is necessary.”

“It’s hard because we have to have the roads safe,” said Gaskill. “But we need to advance as a scientific community and find ways that we can create product that is less damaging to the environment.”