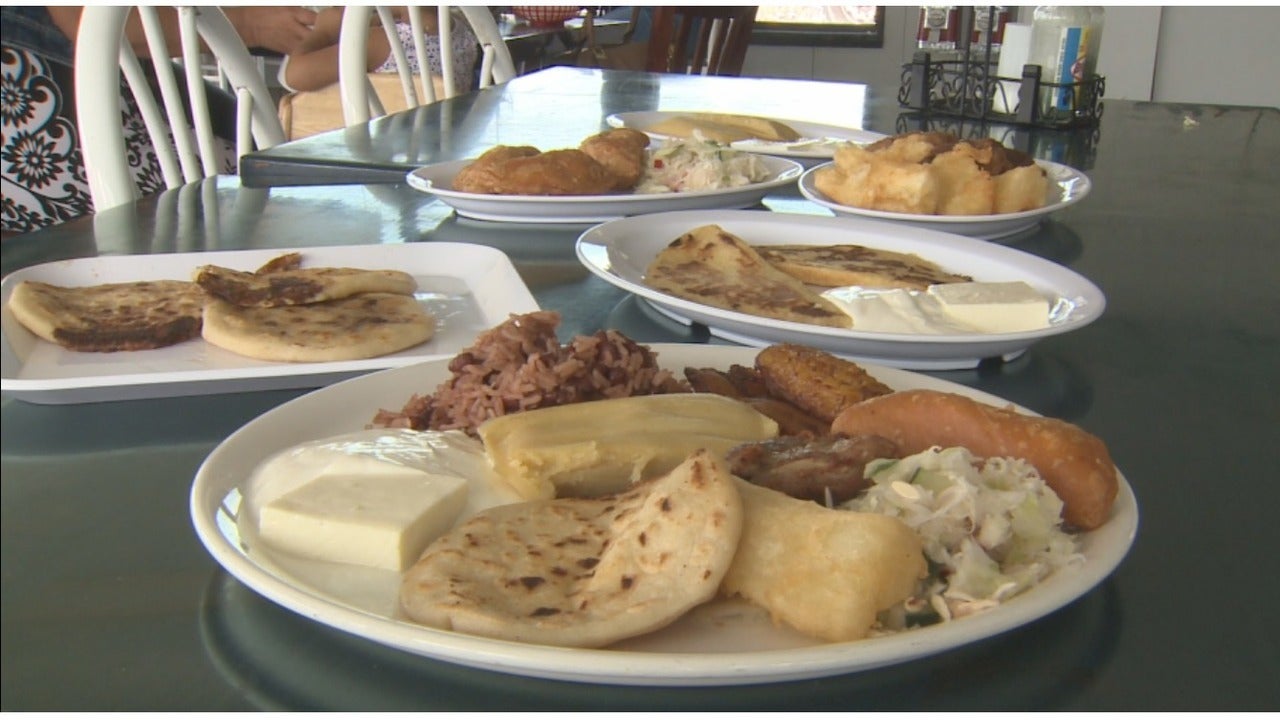 INDIANAPOLIS (WISH) — When most Hoosiers think of Hispanic food, they think of Mexican or Tex-Mex. Take a stroll down Indy’s 38th Street International Marketplace and you’ll find signature dishes from dozens of Latin American countries, each with their own flair.

Visit Indy reports more than 70 languages are spoken along the International Marketplace inside more than 700 ethnic businesses. At least 50 of those businesses leave their customers full of fresh, flavorful, and distinctly foreign cuisine.

“We actually want to bring our roots here our traditional food. Small meals, fast to make and very good,” Molina says through a translator, her employee Lorena Ortiz-Alvarez.

El Salvador means “The Savior” and its cuisine is known for a creative application of simple ingredients like flour, cornmeal, rice, beans, cheese and pork. Those compound to fill a menu with dozens of very Salvadorian dishes that customers travel across the city to eat.

Molina recommends sweet-flavored and soft-textured tamales with sour cream, cooked yucca root with a texture like a potato, and fried pork called “chicharrones.”  She also makes potato and vegetable-stuffed pastelitos that deep fried into a palm-sized pocket, and sweet or savory riquas served with soft cheese and sour cream.

Molina and Ortiz-Alvarez both agree, the pupusas are customers’ favorite.

“When you open it you can see the cheese melting in front of you and it’s just a good flavor,” Ortiz-Alvarez says.

Molina dons plastic gloves while Ortiz-Alvarez shows us around the kitchen where “all the magic happens.”

“First she’s going to grab a little ball of masa which is cornflour,” she says as Molina begins stuffing the flattened doughy ball with pork, cheese, and beans. “She stuffs in in there, rolls it up and smooths it out to make it a perfectly made pupusa. Then it goes on the grill until it’s perfectly done.”

The pupusas are served piping hot, and are made with a combination of ingredients including shrimp, shredded pork, and refried beans.

Around the corner, pork is the star of the show in Cuban cooking at The Havana Cafe.

Brenda Zelaya lets us into her well-kept and decorated Cuban dining room off Moller Road north of 38th Street.

“There are so many that they come and say, ‘We’ve never tried Cuban food before,’ so that’s their first experience,” she says, “and we are glad to have that customer have that kind of experience.”

Zelaya says one of the most recognizable favorites at Havana cafe are Cuban sandwiches.

“It’s made basically with pork, ham, Swiss cheese, pickles, mayo, mustard, and butter,” she says as the restaurant’s chef puts a thickly-laid sandwich on a flat press.

Seasoned rice and vegetables, full of flavor and not spice, are also all throughout the menu, along with roasted pork as soft as silk.

“So that’s a pork shoulder,” she says as the chef opens a deep, steaming tray with one large cut of pork and begins to pull it apart with a fork, “and that is made in the oven so that takes about three or four hours to be cooked before we can do that.”

The chef picks a portion pork off the shoulder cut like it’s noodles in a soup, incredibly tender in long strands. Zelaya explains the special sauce you dip the pork into makes it distinctly “Cuban.”

“The mojo sauce is made with vinegar, lemon, garlic, onion,” she says. “You can dip in or you can put it on top.”

It’s served in a metal cup the size of a shot glass, and Zelaya admits some customers could down two shots of it in no time.

She says many of her customers come from out of town or even out of state to have a taste of home. Havana Cafe’s menu is very traditional, she says, and if she added many of the less-traditional but equally-tasty dishes served in Cuba, the menu would triple in size.

Zelaya at Havana Cafe and Molina at Pupuseria la Salvadoreña both say they’re very happy living and working alongside such a cultural marketplace in Indianapolis. They encourage everyone to branch out past their traditional dinner and try out new cuisine that just might become a tradition in your family.