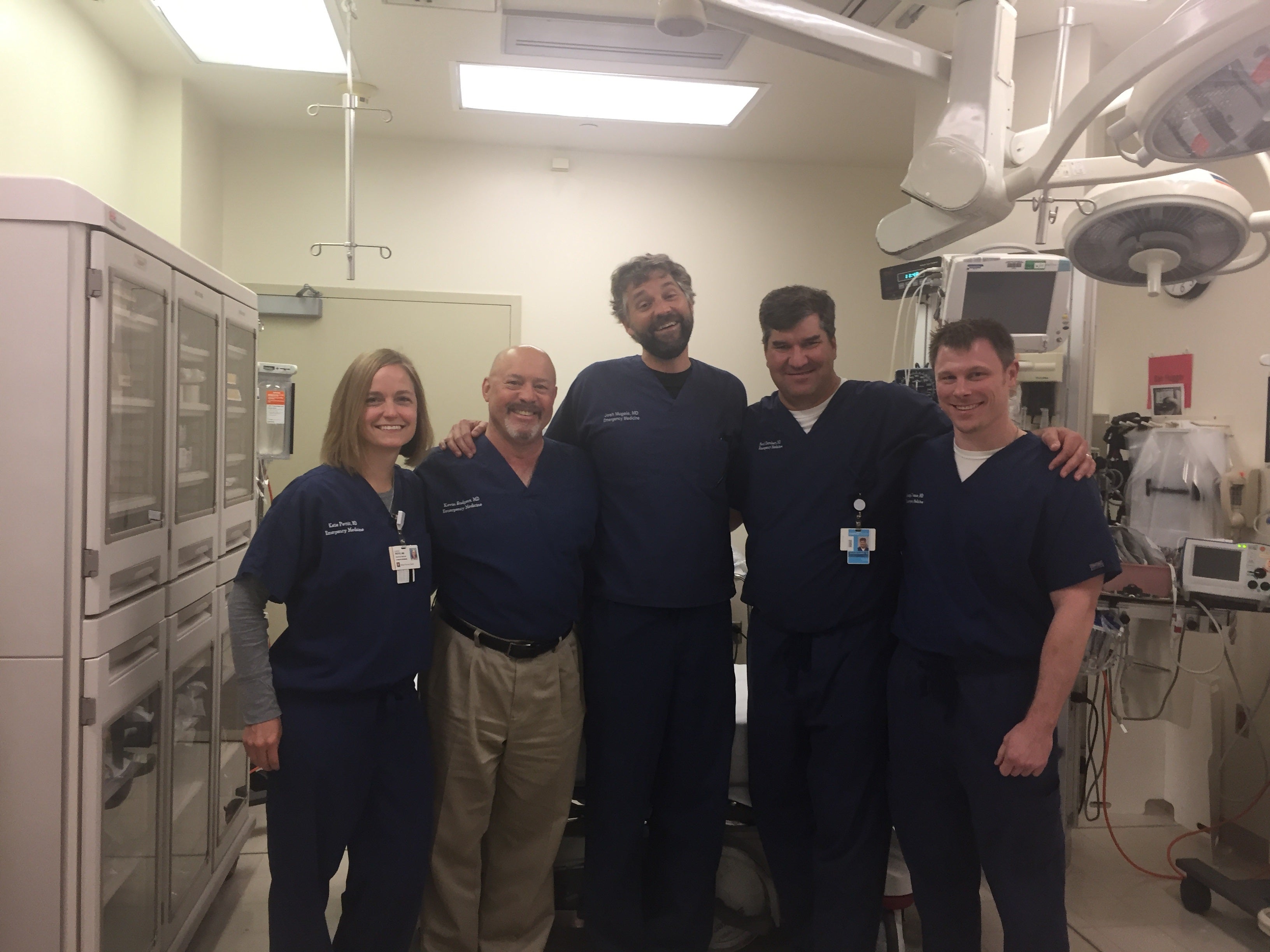 Police have not released further information on the suspect or a potential motive. Family and friends of Dr. Rodgers held various memorials and vigils around Indianapolis Tuesday, as they await more information on the tragic death of their beloved mentor and physician.

Cathedral High School held a memorial service Tuesday morning that was closed to the media. Dr. Rodgers was a father to four sons, one completing his senior year at Cathedral. Dr. Rodgers was also an assistant lacrosse coach at the school.

A memorial mass was held Tuesday afternoon at Marian University, the school of another of the Rodgers’ sons, and the workplace of Mrs. Ruth Rodgers, who serves as dean of students. The mass was also closed to the media but university representatives expressed their condolences off-camera, remarking how deeply the Rodgers family has touched their institution.

Kevin Rodgers also served as president of the American Academy of Emergency Medicine (AAEM), a national board dedicated to enhancing and furthering the profession and aid of emergency medicine. The president-elect of the AAEM, Dr. David M. Farcy, currently serving as chairman of the Department of Emergency Medicine at Mount Sinai Medical Center in Florida, spoke to 24-Hour News 8 Tuesday, describing Dr. Rodgers as a “powerful force.”

“I’ve received today over a thousand phone calls, emails, and pouring in the overwhelming love and dedication for Kevin,” said Dr. Farcy. “From residents that he’s trained a year ago, from residents that he’s trained 20 years ago. From people that have been in the military, to people that just met him in a meeting, I’ve only heard devotion. An amazing educator, an amazing clinician, an amazing mentor. He has influenced hundreds and hundreds.”

Dr. Farcy said Rodgers was a loving dad, husband, and friend, and an expert in emergency medicine. He also said Rodgers was a mentor, and described a recent experience where Rodgers provided valuable advice when dealing with the sudden death of a loved one.

Dr. Farcy says he will step in as interim president of the AAEM but out of respect for Dr. Rodgers, will not fill the position of president until the board’s elections in April 2018.

Statement from the American Academy of Emergency Medicine:

It is with a heavy heart I write to inform you that AAEM President, Kevin Rodgers, MD FAAEM, was tragically and violently taken away from us today in Indianapolis, IN. Throughout the course of his career, Dr. Rodgers demonstrated incredible leadership and dedication to AAEM, serving faithfully on the board of directors for 12 years as an at-large member, secretary-treasurer, vice president and most recently, as president. He has been an integral part of AAEM’s educational programs and was a tireless champion for the organization.  He touched thousands of emergency medicine residents throughout his career in his roles as an educator and program director. Kevin was also a veteran of the U.S. Army, where he served with distinction for over 10 years before honorably separating at the rank of Major. It is still too early for us to process this tragedy. Our thoughts are with his family and his colleagues at Indiana University during this most difficult time. May he rest in peace with eternal love.”

In light of the death of Dr. Kevin Rodgers, beloved husband of Dean Ruth Rodgers, tomorrow’s (Tuesday’s) daily Mass will be moved to 12:30 PM in the Marian Hall chapel and will be offered for the repose of Kevin’s soul and for the Rodgers family. In addition, we will offer these opportunities for the Marian community to come together:

· Tonight, after the 7 pm Sacred Choir concert in the Marian Hall Chapel, we will have a brief prayer service

· Tonight, after the tree lighting service, the Marian community is invited to gather at Alumni Hall. Counselors and staff from Campus Ministry will be there, and faculty and staff are especially invited to come to help our students during this difficult time

· The Marian Hall, Evans Center and Oldenburg Hall chapels will be open and staffed by Campus Ministry staff tonight between 8 and 10 p.m. and tomorrow between 8 am and noon

· The Counseling Center will be open for students, faculty and staff from 8 am until 4 pm tomorrow (Tuesday).

Whether or not you are able to join us for these events please pray for Dean Rodgers and her family.”

The Rodgers family is grateful for the outpouring of prayers and condolences received since learning of Kevin’s untimely passing. As the family begins to cope with this tragic loss, they would like to ask the media to respect their privacy and direct all questions about the circumstances surrounding his death to IMPD.

It is with great sadness that we share with you Dr. Kevin Rodgers, an assistant lacrosse coach at Cathedral High School. Dr. Rodgers has three sons who are Cathedral graduates and one son who is a senior this year at Cathedral. Counselors have been reaching out to our students and staff all afternoon. Counselors will also be on hand tomorrow. In addition, we will have a prayer service for the Rodgers family tomorrow. We ask that everyone keep the Rodgers family in their prayers during this difficult time.”

Statement from IU School of Medicine:

“We learned this afternoon that one of our most revered faculty members, Kevin Rodgers, MD, died earlier today. The specific circumstances are unknown and a formal investigation by IMPD is underway. The IU School of Medicine community is deeply saddened by this loss. Dr. Rodgers was a well-respected faculty educator who was heavily involved in the Emergency Medicine training program for more than 25 years. He received the 2015 Inspirational Educator Award in recognition of extraordinary teaching, based on the growth, development and professionalism of learners.”