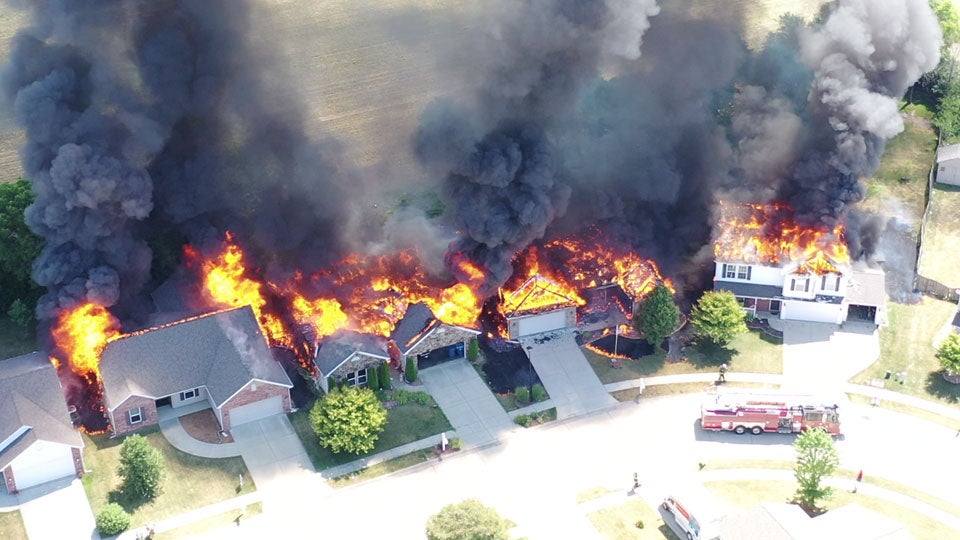 WEST LAFAYETTE, Ind. (WLFI/WISH) — One firefighter was hospitalized with a heat-related injury but no one else was hurt when multiple homes caught fire Friday afternoon in the Lindberg Village subdivision.

Ed Ward, chief of the Wabash Township Fire Department, said crews were sent shortly after 3:35 p.m. to Tesla Drive in the subdivision northwest of West Lafayette along Lindberg Road between State Road 26 and Klondike Road.

A neighbor told WLFI’s Marvin Bills that he heard a big boom and came outside to find five houses in flames. He then sprayed his home with water to keep the siding on it.

The fires were under control shortly before 6 p.m.

Ward said the cause of the fire and where it started has not been determined. He said the Indiana Fire Marshal’s Office will investigate.

Utility crews were going house to house in the subdivision to shut off natural gas meters, Ward said.

A person in one of the homes when the fires began safely evacuated, Ward said. Also, one animal was rescued from a home. Several homes had signs indicating they were for sale.

The flames were so hot that some homes across the street from those on fire had their siding melted, Ward said.

One person shared drone footage of the houses in flames with WLFI.

The smoke and flames were so thick that they showed up on Indianapolis weather radar.

Red Cross and the Tippecanoe County Emergency Management Agency were helping people who had their homes damaged.