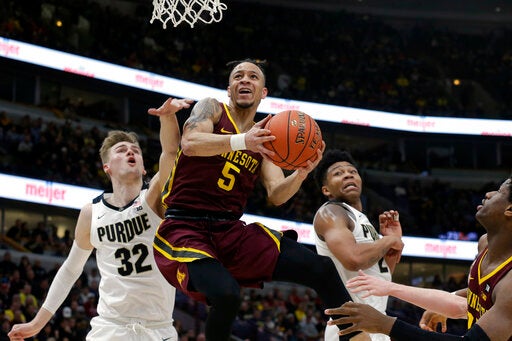 Murphy drove for a go-ahead three-point play and hit two free throws in the closing minutes, and the Gophers (21-12) beat the Boilermakers (23-9) for the second time in 10 days when Carsen Edwards missed a 3 as time expired.

Coffey made 7 of 13 shots. Daniel Oturu added 13 points and 10 rebounds, helping Minnesota advance to the semifinals for the second time in three years. The Gophers will face the Michigan-Iowa winner.

Matt Haarms scored 16 points for Purdue. Ryan Cline added 14 points and eight assists. But after winning 17 of 20 to surge to a share of their second conference regular-season championship in three years, the Boilermakers never really found their rhythm.

Purdue made just 6 of 24 3-pointers, with Carsen Edwards missing seven of eight from beyond the arc. The Big Ten’s leading scorer, he finished with 11 points on 4-of-17 shooting.

Minnesota led by as much as 10 in the second half. But Trevion Williams put back a missed 3 by Edwards to give Purdue a 71-69 lead with about 3:30 remaining.

Murphy drove for a three-point play to put Minnesota back on top and hit two free throws with 1:17 remaining to make it a three-point game.

After a week miss by Haarms inside, Minnesota committed a shot-clock violation with 27 seconds left.

Haarms scored in the post to cut it to 74-73 with 12 seconds left. Purdue immediately fouled Dupree McBrayer, who hit the first free throw but missed the second.

Haarms grabbed the rebound, but Edwards missed the potential winning 3 from the left corner as time expired.

Minnesota: The Gophers were already a good bet to make the NCAA coming into this tournament. They might have avoided a play-in game with their overtime victory over Penn State on Thursday and followed it up with an impressive win.

Purdue: The Boilermakers missed their share of open shots and paid in a big way. Instead of making a push for their second Big Ten Tournament title, they’ll try to regroup for the NCAAs.

Minnesota: Will face No. 10 Michigan or Iowa in the semifinals.