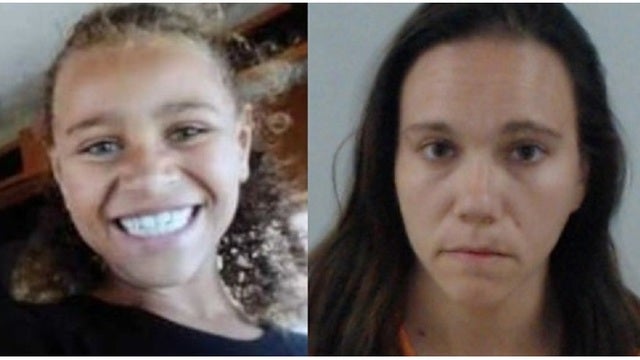 LAKE CITY, Fla. (WFLA) – A 10-year-old Utah girl who was reported missing nearly a year ago has been reunited with her father in Florida, News 4 Jax reported.

Authorities said Ariana Bozeman was kidnapped by her biological mother, 34-year-old Dawn Closson, after the girl’s father was granted sole custody of the child.

Deputies located Bozeman and Closson at an interstate rest stop near Lake City Wednesday morning after pursuing a tip from an anonymous Florida resident who noticed something suspicious about the mother and daughter.

The tipster went online and read reports about the missing girl and called police, the news station reported.

“This is just a mindful and watchful resident that was able to help us bring this to justice and get the girl safely back,” said Sergeant Isaac Akeroth of Enoch Police.

Bozeman and Closson were found inside of a vehicle with Closson’s boyfriend and several other children, authorities said.

Closson was arrested and charged with custodial interference across state lines, then booked into the Columbia County Jail. More charges are pending, according to police.

Closson’s boyfriend and the other children inside of the vehicle were dismissed and Bozeman was placed into protective custody by the Department of Children and Families.

The girl’s father, Adrian Bozeman, drove from Oklahoma, where he is stationed at an Air Force base, to Columbia County and was reunited with his daughter on Thursday. The news station reported they spent the morning at Walmart to buy clothes for Ariana before they started their road trip home.

Adrian Bozeman told News 4 Jax he learned his daughter, Closson and her boyfriend had been living out of an RV, but ditched it and started living out of an SUV. The girl was homeschooled while they were on the run.

The father said he plans to enroll his daughter in a counseling program offered by the military.