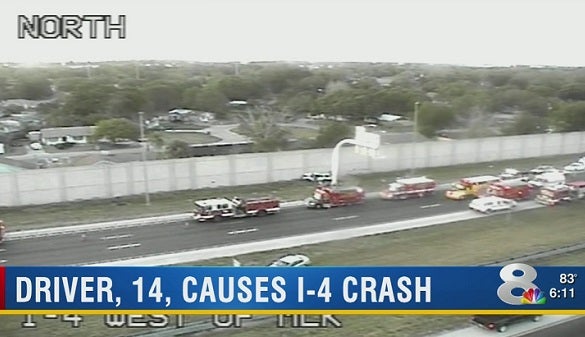 The Florida Highway Patrol says the 14-year-old was driving a Ford Explorer with six passengers on Interstate 4 around 7 p.m. Saturday when the crash happened.

Troopers say the boy was trying to change lanes but noticed another car in the lane he was trying to move into and overcorrected to avoid a crash. The boy then lost control of the car and went off the road, hitting a barrier wall, according to the FHP crash report.

The driver and five of his passengers, including a 3-year-old and two 6-year-olds, are battling serious injuries. A 16-year-old passenger suffered just minor injuries.

A 32-year-old woman and a 34-year-old man were also seriously injured.

Troopers say the woman is the 14-year-old driver’s mother. The man is the father of the 3-year-old and 6-year-olds. The 16-year-old passenger is a friend of the driver.

“My big brother that was driving he pulled it back and they lost control of the car and it flew and then it drived (sic) off the interstate and it flew up and I was just stuck between her car seat, ” the injured 6-year-old told 24-Hour News 8’s sister station News Channel 8.

“Thank God they’re all right. That’s all I can say is thank God,” the teen and the injured children’s grandfather said.

“It was his birthday, he was six years old yesterday (referring to the teen’s 6-year-old brother who was injured) we were going to sing happy birthday to him and then after that we were going to dye eggs. I had pizza for them to eat, but at 7:20 I got a call from my daughter crying and somebody had took the phone over from her and talked to me and told me it was bad,” he continued.

The 14-year-old was charged with careless driving and driving without a license. More charges are pending.

The crash shut down part of I-4 for several hours.