2021: Year of the Unruly Airline Passenger 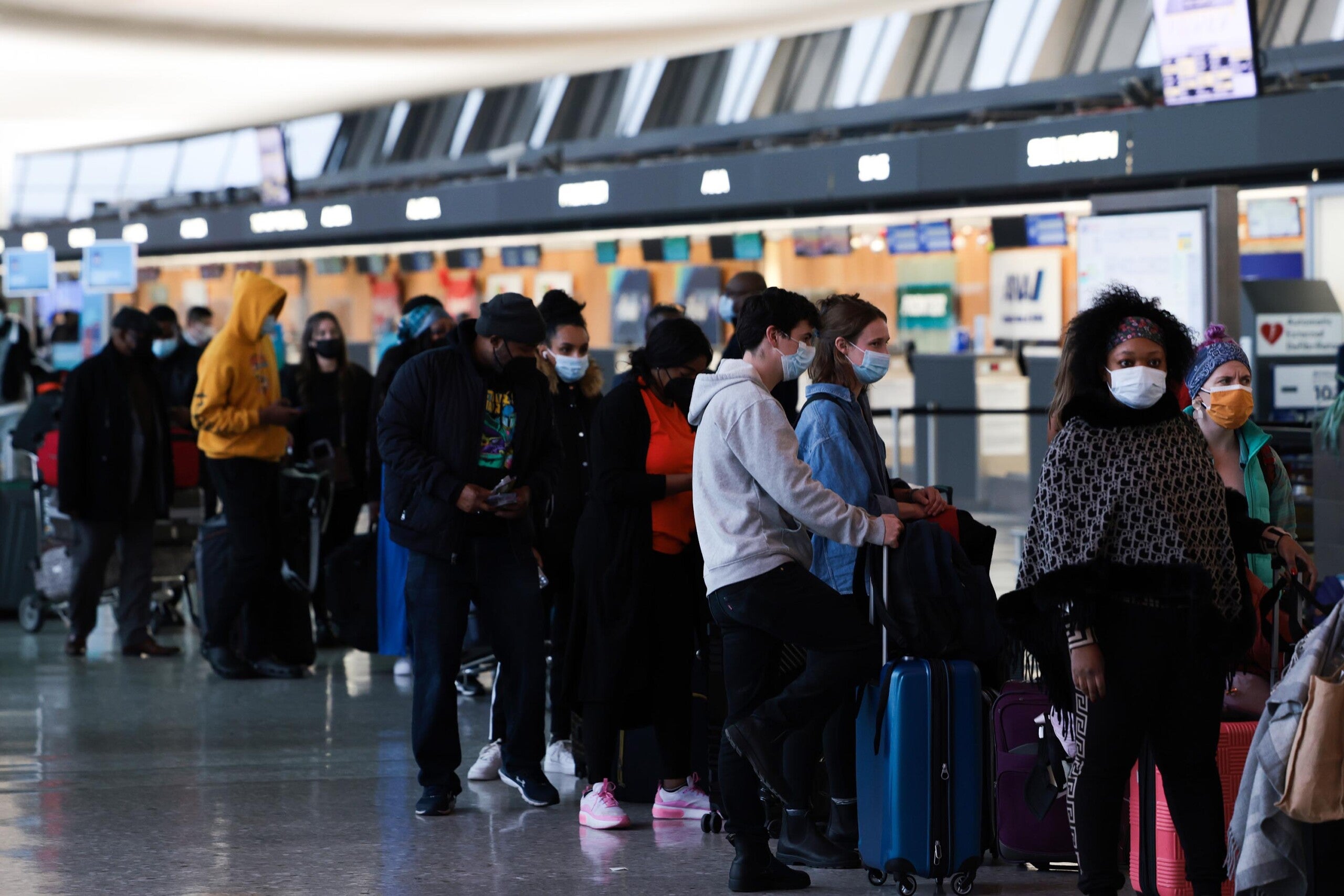 DULLES, VIRGINIA - DECEMBER 27: Passengers wait in line to check in for their flights at the Dulles International Airport on Dec. 27, 2021 in Dulles, Virginia. According to media reports, at least 2,600 more flights were canceled Monday amid the surge in coronavirus cases, which have affected the staff within airlines. (Photo by Anna Moneymaker/Getty Images)
by: Marnie Hunter, CNN
Posted: Jan 13, 2022 / 10:11 AM EST / Updated: Jan 13, 2022 / 10:11 AM EST

Last year was the worst on record for unruly airplane passenger behavior, according to Federal Aviation Administration data.

Thursday marks one year since the FAA announced a “zero tolerance” policy for unruly passenger behavior that skips warnings or counseling and goes directly to penalties, which can include heavy fines and jail time.

The policy, spurred by incidents tied to masks and violence at the US Capitol, was originally set to expire at the end of March 2021. It was extended at least until the federal mask mandate is lifted.

The unruly passenger incident rate has dropped approximately 50% since record highs in early 2021, the FAA notes on the page where it tracks incidents, “but there remains more work to do.”

A lot more work, according to flight attendant and union leader Sara Nelson.

Nelson, international president of the Association of Flight Attendants-CWA, is painfully aware of what airline crewmembers continue to face.

In addition to the “extremely violent” and most “outrageous and egregious” cases that have made headlines during the pandemic, there has been a steady stream of aggression.

“We also have a lot of incidents that are happening more regularly that are violent maybe not directly toward someone, but in actions and words: punching backs of seats, spitting, throwing trash at people, yelling obscenities, using racial, gender and homophobic slurs,” Nelson told CNN Travel.

“Today when flight attendants put on their uniforms, they don’t know if it’s going to be a signal of leadership and authority for safety in the cabin or a target for a violent attack,” she said.

A huge spike in serious incidents

However, the FAA has recorded the number of unruly passenger incidents that rose to the level of being investigated since 1995.

A bit of good news from the past year is the approximately 50% drop in the rate of incidents from early 2021, when the FAA launched its zero tolerance campaign amid a record high number of incidents.

“Our work is having an impact and the trend is moving in the right direction. But we need the progress to continue,” FAA Administrator Steve Dickson said in a news release marking a 50% drop in September. But the figure at that time was more than twice as high as the end of 2020, the release said.

“This remains a serious safety threat, and one incident is one too many,” Dickson said.

As of November 4, the FAA had referred 37 out of 227 cases for which it had initiated enforcement action to the FBI for criminal prosecution review. (The FAA does not have authority to prosecute criminal cases).

It’s part of growing attention from the Justice Department on unruly passenger behavior.

Additional cases are being referred to the FBI regularly, the FAA told CNN.

Airline industry group Airlines for America, which has been working with the government to address unruly passenger incidents, said in a statement that it continues to “advocate for increased and expedited prosecution by the Department of Justice for criminal cases of violence or assault against passengers or crew.”

At least one passenger involved in a 2021 incident has been charged with assault and interference with a flight crew.

Nelson said eventually seeing convictions and jail time for some passengers will “serve as the most effective deterrent to these incidents on the planes.”

She would also like to see a centralized no-fly list of violators that could be used by all airlines to deny flights.

Some of the most immediate consequences for passengers in 2021 came in the form of hefty fines. The FAA can propose fines of up to $37,000 per violation against unruly passengers.

The FAA initiated enforcement actions on 350 cases in 2021.

The agency said it has not tallied the full 2021 amount levied in fines against unruly passengers, but the figure had topped $1 million by August. A number of the incidents that prompted fines in 2021 involved alcohol.

As of Tuesday, 76 unruly passenger incidents had been reported since the start of this year, with one investigation and one enforcement action initiated.

Nelson stresses that “the vast majority of people who come on the planes want to just have a safe, uneventful flight, and that continues to be true.”

Work with agencies, airports, airlines and law enforcement has “built stepping stones” toward tackling the problem, she said.

So far, the most remarkable change Nelson has seen since January 2021 is widespread awareness — with kindness and appreciation from some passengers as welcome byproducts.

“We know that people understand this is happening, and that is a huge difference,” Nelson said. “We just have to solve it now.”