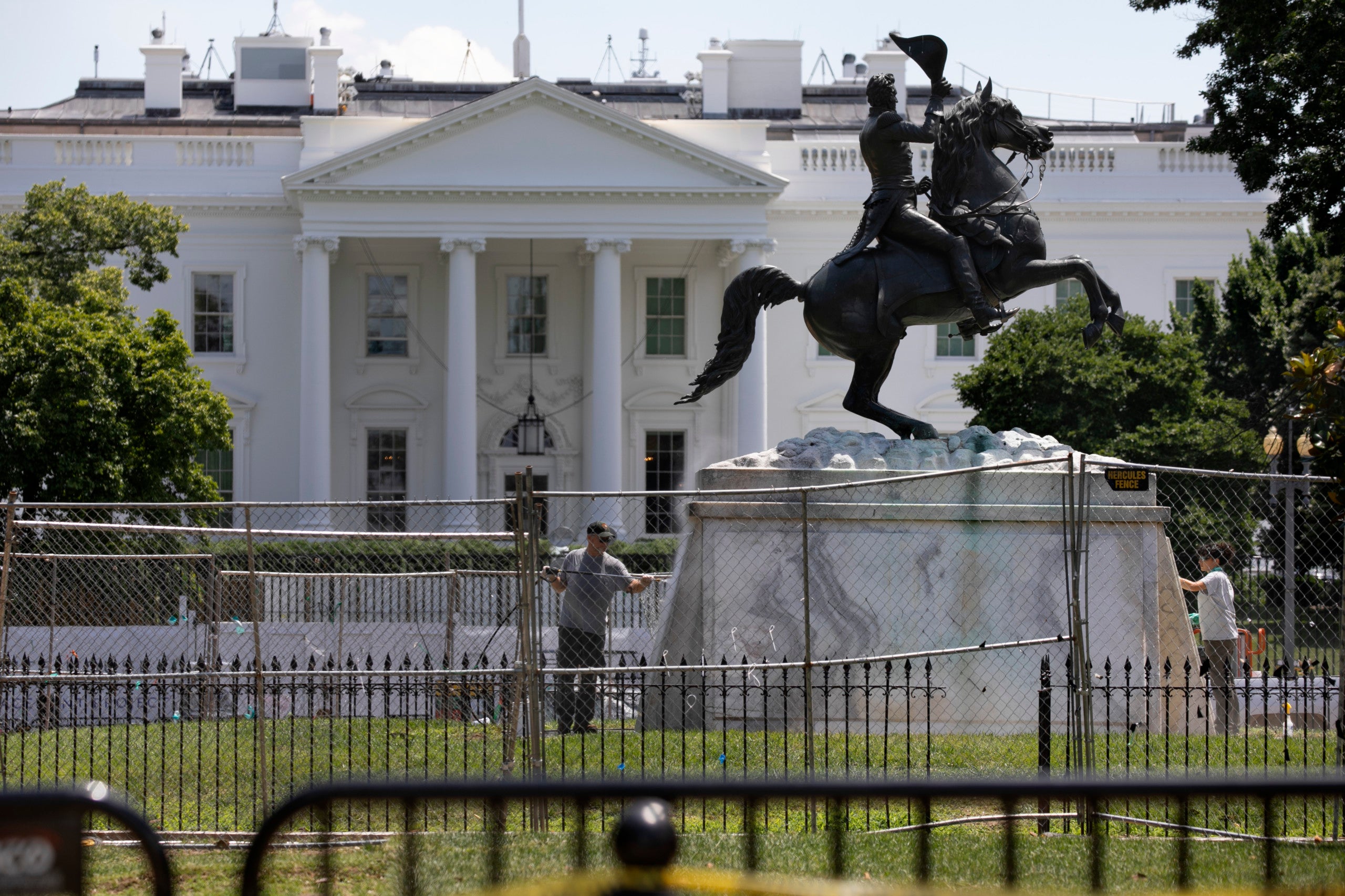 The base of the statue of former president Andrew Jackson is power washed inside a newly closed Lafayette Park, Wednesday, June 24, 2020, in Washington, which has been the site of protests over the death of George Floyd, a black man who was in police custody in Minneapolis. Floyd died after being restrained by Minneapolis police officers. (AP Photo/Jacquelyn Martin)
by: Kevin Bohn, CNN
Posted: Jun 28, 2020 / 07:18 AM EST / Updated: Jun 28, 2020 / 07:18 AM EST

(CNN) — The Justice Department has charged four men with destruction of federal property in connection with the attempt on Monday to bring down a statue of former President Andrew Jackson in Lafayette Park near the White House, the US Attorney for Washington, DC and other law enforcement officials announced Saturday.

The attempt to bring down the statue was stopped.

The DOJ alleged Lee Cantrell, Connor Judd, Ryan Lane and Graham Lloyd, along with other unidentified people, damaged and attempted to tear down the statue on Monday. In a criminal complaint, authorities further alleged Judd was seen on video attempting to pull down the statue, and Lane was seen on video tying a rope to the statue and pulling on another rope tied to to it, according to a DOJ press release.

The department also alleged that Lloyd was seen destroying the wheels of cannons located at the statue’s base as well as pulling on ropes trying to bring down the statue.

The statue of Jackson, the seventh president of the United States, has become controversial because of his harsh treatment of Native Americans.

CNN is attempting to reach the four men charged for comment.

President Donald Trump re-tweeted the announcement of the charges and has re-tweeted several law enforcement posts of posters of men wanted for questioning regarding the incident. Since the Monday incident, he has repeatedly criticized the protesters who tried to topple the statue.

“The United States Attorney’s Office for the District of Columbia will not stand idly by and allow our national monuments to be vandalized and destroyed. This Office remains steadfast in its commitment to protect the sacred First Amendment right of individuals to peacefully protest, but these charges should serve as a warning to those who choose to desecrate the statues and monuments that adorn our nation’s capital: your violent behavior and criminal conduct will not be tolerated,” acting US Attorney Michael Sherwin said in a statement.

“The FBI respects the peaceful exercise of First Amendment rights, but we will not allow opportunists to hijack peaceful protests to incite violence and destruction of property,” said James Dawson, the special agent in charge of the FBI Washington Field Office’s Criminal Division. “We will continue to work with our partners to enforce federal laws prohibiting damage to government facilities and property.”