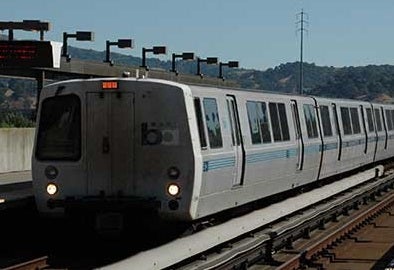 OAKLAND (KRON) – Dozens of teens rushed onto a BART train car in Oakland over the weekend, robbed and in some cases beat passengers, according to BART officials.

About 40 to 60 juveniles jumped the fare gates at the Coliseum Station Saturday night and ran to the second-story platform, where they entered a Dublin-bound train car after it approached the station, said BART spokeswoman Alicia Trost.

The teens grabbed bags and cell phones from passengers and took off into the surrounding East Oakland neighborhood before BART officers could respond. The train was held for about 15 minutes.

Six people were robbed on the train while one person was robbed on the platform. The group stole five cellphones, a duffle bag, and a purse.

Two people were punched in the face, Trost said. The victims suffered minor facial injuries and were treated at the scene.

The suspects were reportedly unarmed, according to BART officials.

Six cars on the nine-car train had working cameras. BART officials are still checking to see if the cameras that work were on the cars where the robberies happened. It’s unclear at this time how many cars robberies occurred in.

A series of robberies on BART trains has prompted the agency to step up patrols in recent weeks.