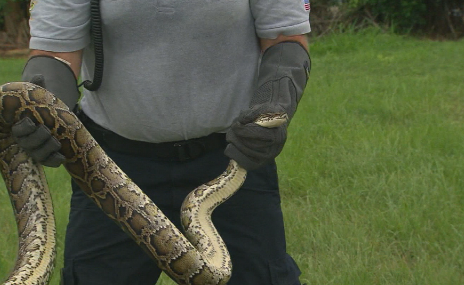 MIAMI, Fla. (CNN) – A woman in Florida found something she didn’t expect in a pile of clothes at a flea market.

A shopper in Miami found a 7-foot-long Burmese python between a pile of clothes.

Miami-Dade Fire Rescue was called and a member of Venom One Unit was called.

According to an expert reptile handler, the snake looked like it had just eaten and may have thought the stack of clothes would be a good place to relax while digesting it’s food.

The python was handed over to the Florida Fish and Wildlife Conservation Commission.

Authorities said it’s fairly common to find pythons in the Miami area this time of year.

What do you think you would have done if you found a 7-foot-long python in between a stack of clothing? Tell us your thoughts on Facebook!