7 picked, 7 to go for jury in ex-cop’s trial in Floyd death 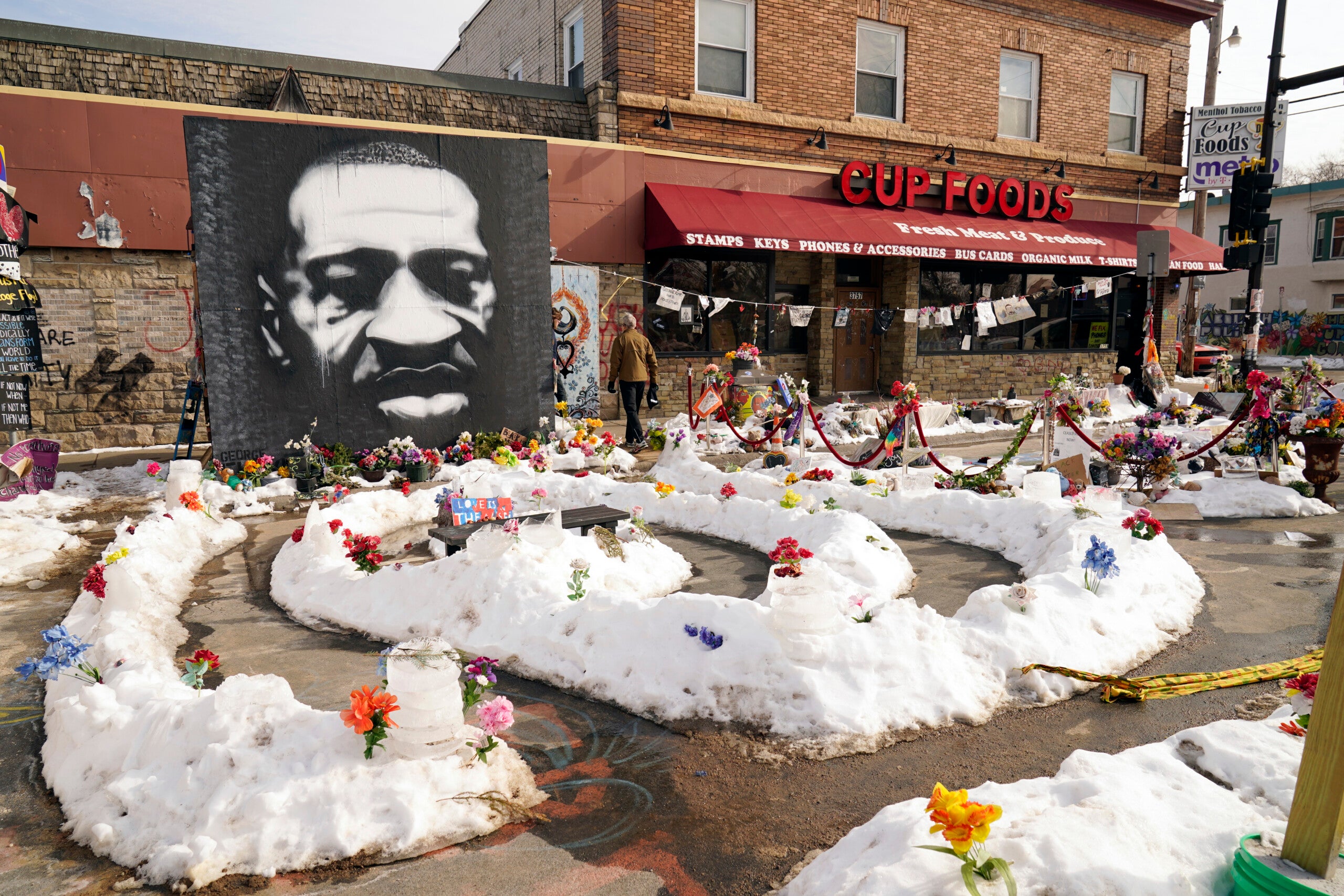 FILE - In this Feb. 8, 2021 file photo, A mural of George Floyd is seen in George Floyd Square in Minneapolis. The city of Minneapolis on Friday, March, 12, 2021, agreed to pay $27 million to settle a civil lawsuit from George Floyd's family over the Black man's death in police custody, as jury selection continued in a former officer's murder trial. The settlement includes $500,000 for the south Minneapolis neighborhood that includes the 38th and Chicago intersection that has been blocked by barricades since his death, with a massive metal sculpture and murals in his honor. (AP Photo/Jim Mone File)
by: STEVE KARNOWSKI and AMY FORLITI Associated Press
Posted: Mar 15, 2021 / 06:03 AM EST / Updated: Mar 15, 2021 / 06:03 AM EST

Seven people have been picked to hear evidence in the trial against Derek Chauvin, who is charged with murder and manslaughter. Attorneys will continue questioning jurors one by one until they get to a total of 14. Twelve will deliberate and two will be alternates.

Floyd, a Black man, was declared dead on May 25 after Chauvin, who is white, pressed his knee against his neck for about nine minutes. Floyd’s death sparked sometimes violent protests in Minneapolis and beyond and led to a national reckoning on racial justice. Chauvin is charged with second-degree murder, third-degree murder and manslaughter and at least three weeks have been set aside for jury selection.

In the midst of jury selection, Minneapolis last week agreed to pay $27 million to settle a civil rights lawsuit from Floyd’s family over his death. Floyd family attorney Ben Crump, called it the largest pretrial settlement ever for a civil rights claim. The settlement includes $500,000 for the south Minneapolis neighborhood that includes the 38th and Chicago intersection that has been blocked by barricades since Floyd’s death, with a massive metal sculpture and murals in his honor. The city didn’t immediately say how that money would be spent.

Legal experts said publicity about the settlement could be bad for the defense, leading some potential jurors to think guilt has been decided. But they doubted it would really affect the criminal trial. Judge Peter Cahill has told members of the jury pool to avoid all news coverage about the case.

The process of questioning jurors has been long and nuanced, with attorneys for both sides trying to ferret out potential jurors who may be biased. The defense is striking people who tell they court they already have strong feelings about Derek Chauvin’s guilt. The prosecution, meanwhile, is blocking potential jurors who seem inclined to give police the benefit of the doubt.

The seven jurors selected so far include five men and two women. Four of the jurors are white, one is mixed race, one is Black and one is Hispanic. The jurors range in age from their 20s to their 50s.

The earliest opening statements would begin in Chauvin’s trial is March 29.

Three other former officers face an August trial on charges of aiding and abetting second-degree murder and manslaughter.