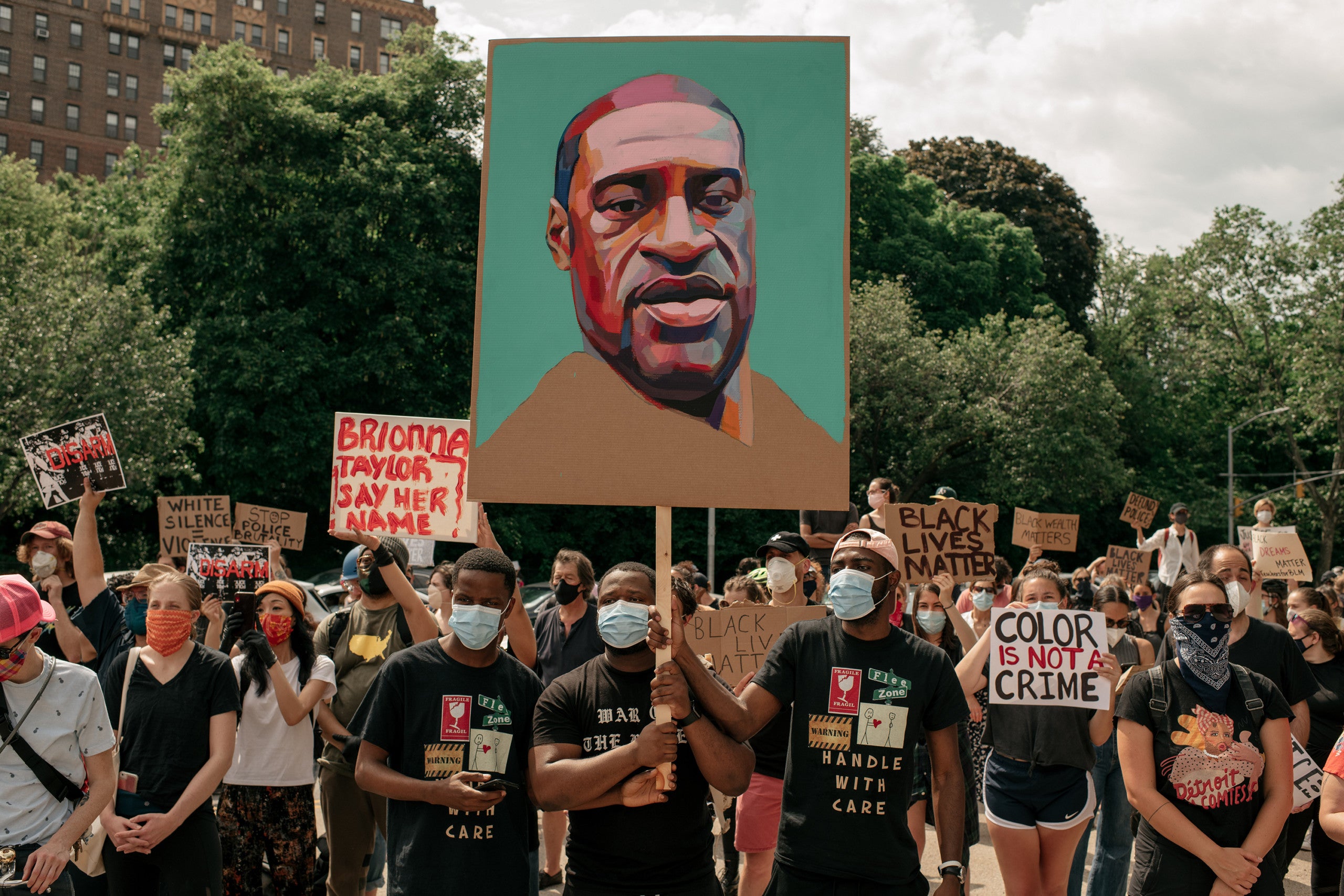 NEW YORK, NY - JUNE 04: Demonstrators denouncing systemic racism in law enforcement and the May 25th killing of George Floyd by a Minneapolis Police officer gather at a press conference in the borough of Brooklyn calling for the passing of bills to increase police accountability throughout New York state on June 4, 2020 in New York City. Days of protest have followed in many cities across the country in response to the death of George Floyd while in police custody in Minneapolis, Minnesota on May 25th. (Photo by Scott Heins/Getty Images)
by: Eric Levenson and Elizabeth Joseph, CNN
Posted: Jun 8, 2020 / 08:25 PM EST / Updated: Jun 8, 2020 / 08:25 PM EST

These are just a few recent substantiated allegations of misconduct against New York Police Department officers, according to a report by the Civilian Complaint Review Board (CCRB), a city agency that investigates and delivers findings on police misconduct complaints.

The CCRB report released Monday examines 112 fully investigated complaints involving young New Yorkers between January 2018 and June 2019. Taken together, they illustrate the fraught relationship between police and young people of color and illustrates one reason people are protesting against systemic racism in policing.

“Sadly, after years of witnessing news about police misconduct and possibly experiencing it themselves, even the youngest among us have an awareness of the tension that too often exists between the police and civilians,” said CCRB Chair Fred Davie in a statement.

“As young New Yorkers lead the way in calling for change in our city following the deaths of George Floyd, Breonna Taylor, and countless others, it’s time for the NYPD to re-consider how officers police our youth, address disparities in law enforcement, and commit to swift discipline when officers engage in misconduct.”

According to the CCRB report, of 112 investigated complaints involving youth, 29% were substantiated, which means they occurred and were improper based on a preponderance of the evidence.

The report also offered several recommendations, including for the NYPD to include age and race in its data on use of force.

In a statement, the New York Police Department noted that in January, it launched a strategy to prevent and address youth crime.

“A top priority Commissioner (Dermot) Shea has set for the NYPD is to reimagine doing all we can to protect and serve New York City’s kids,” NYPD spokeswoman Sgt. Mary Frances O’Donnell said. “After careful review, we accept each of the CCRB’s thoughtful and constructive recommendations — some of which are already in the process of being implemented and all of which will strengthen our new Youth Strategy.”

Mayor Bill de Blasio, facing calls from protesters to defund the police, said Sunday he plans to shift some funds from police to youth and social services.

“The over-policing of communities of more color clearly extends to our youth, and while these numbers are shocking, they aren’t surprising in the context of an administration that maintains most NYPD funding in its executive budget while slashing youth services,” he said.

“Now that some of that funding may shift, it’s also critical we ask whether these encounters with law enforcement are necessary,” he said. “I suspect that many are not, and as we know, interactions with the system only perpetuate it.”

The CCRB report details several instances of young black boys policed for innocuous activities such as high-fiving, running, carrying backpacks, playing with sticks or jaywalking. Here are a few of those cases.

8-year-old handcuffed after playing with stick

In March 2018, a group of black and Hispanic boys aged 8 to 14 were walking home, talking and laughing. Some of them played with sticks picked up from the ground, the CCRB report states.

While on the sidewalk, multiple police cars approached. The officers exited their cars, one with his gun drawn, and told the boys to get against the wall. They complied and were all frisked by the officers, and no weapons were found, the report states. In all, eight to 10 police cars and 10 to 16 officers responded to the scene, the report states.

The lieutenant on scene decided to take the 8-year-old and 14-year-old to the station and processed them for disorderly conduct after officers reported seeing the children running with sticks, the report states. The two boys were transported there while handcuffed and in tears, the report says.

During the CCRB investigation, two officers said they stopped the group because a radio run reported that a group of Hispanic men in their 20s with a machete and a stick were chasing and fighting others, the report states. However, the officers gave inconsistent statements about what the children were doing before they were stopped, including whether they were carrying anything.

Based on the investigation, the CCRB recommended charges against the officers and the lieutenant. The charges are awaiting trial by the agency’s Administrative Prosecution Unit, the report states.

On one spring evening, an 11-year-old black boy walking to meet his mother encountered a group of adult men he recognized. As the boy greeted one of the men with a “quick handshake/high-five,” plainclothes Anti-Crime officers exited their vehicle and approached the group, the report states.

The adult men dispersed. One officer approached the boy and asked for his age, and then proceeded to frisk the boy’s upper body and waist, the report states. A bystander told the officer that he shouldn’t search someone under 13, but an officer replied that drugs can be given to younger children, the report states.

The officers then got back into their vehicle and drove away, the report says.

The CCRB investigation found by a preponderance of the evidence that the officer lacked sufficient justification to stop and frisk the boy. The board recommended command discipline B, which is used for misconduct that is more problematic than poor training but does not rise to the level of charges.

However, the police commissioner downgraded the discipline to formalized training, the report states.

17-year-old stopped for carrying a backpack

In another instance, a 17-year-old boy carrying a backpack was walking with a group of male friends through a New York City Housing Authority complex, talking and listening to music, the report states.

A lieutenant and an officer in a nearby marked police vehicle exited their car, and according to video footage, the officer seized the boy and another person and pushed them against a fence, the report states.

In a CCRB interview, the lieutenant said he suspected the two of criminal possession of a weapon based on his prior knowledge of gang activity there, his initial observations of their age, statements they and their companions made when the officers arrived, as well as the fact that they were carrying bookbags “despite the fact that it was long after the end of the school day,” according to the report.

The lieutenant and officer also observed the group pushing each other and running back and forth, and the lieutenant assessed that they were “acting kind of suspicious,” the CCRB report states.

The CCRB investigation determined these observations did not give them reasonable suspicion to stop the two, and the board recommended the lieutenant and officer receive Command Discipline B, the report states.

However, the police commissioner downgraded the discipline to Command Discipline A, a lesser punishment.