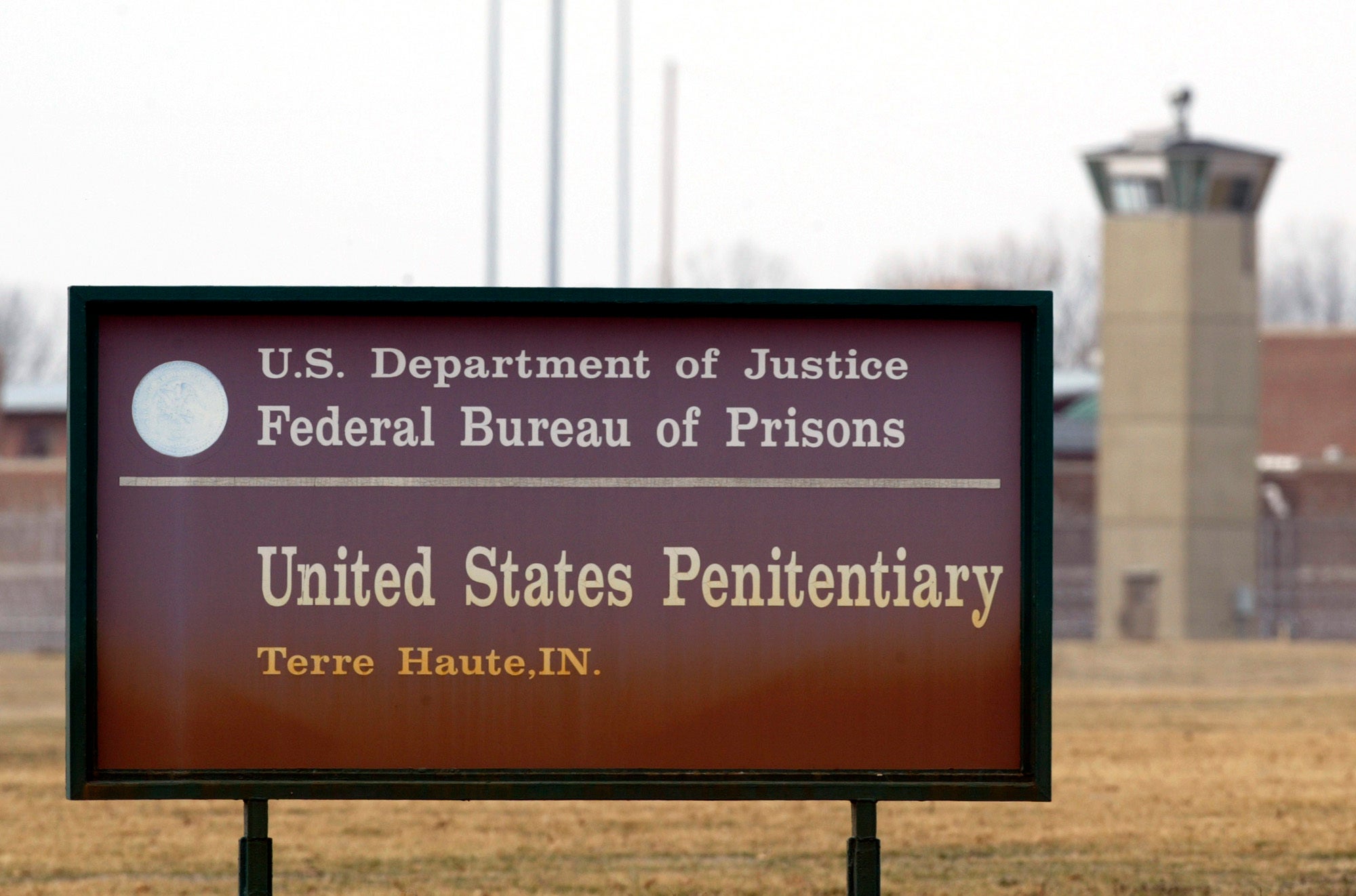 FILE - In this March 17, 2003 oil photo, a guard tower flanks the sign at the entrance to the U.S. Penitentiary in Terre Haute, Ind. After the latest 17-year hiatus, the Trump administration wants to restart federal executions this month at the Terre Haute, prison. Four men are slated to die. All are accused of murdering children in cases out of Arkansas, Kansas Iowa and Missouri. (AP Photo/Michael Conroy File)
by: MICHAEL TARM and MICHAEL BALSAMO Associated Press
Posted: Feb 9, 2021 / 08:08 AM EST / Updated: Feb 9, 2021 / 08:08 AM EST

WASHINGTON (AP) — Dozens of civil rights and advocacy organizations are calling on the Biden administration to immediately halt federal executions after an unprecedented run of capital punishment under President Donald Trump and to commute the sentences of inmates on federal death row.

The organizations, including the American Civil Liberties Union, The Leadership Conference on Civil and Human Rights and 80 others, sent a letter to President Joe Biden on Tuesday morning, urging that he act immediately “on your promise of ensuring equality, equity, and justice in our criminal legal system.”

Biden has been systematically undoing many Trump administration policies on climate, immigration and ethics rules. Although he is against the death penalty and has said he will work to end its use, Biden has not commented on what he will do with Trump’s unprecedented push for the federal death penalty. The Bureau of Prisons carried out more executions under Trump, 13, than any previous president.

The reinstated executions began in July as the coronavirus raged through the prisons. An Associated Press analysis found the executions were likely a virus superspreader. About 70% of the inmates on federal death row in addition to prison staff members, employees on the agency’s execution team and witnesses contracted the virus.

The Trump administration carried out the 13 executions in six months, beginning July 14 and ending four days before Biden’s inauguration on Jan. 20. They were the first federal executions in 17 years, and more were conducted under Trump than in the previous 56 years combined.

White House press secretary Jen Psaki said last week that while Biden has spoken about his opposition to the death penalty, she didn’t “have anything to predict for you or preview for you in terms of additional steps.”

The groups say Biden should step in immediately and take action, as his administration works to establish priorities, address systemic racism and overhaul parts of the criminal justice system.

“Any criminal legal system truly dedicated to the pursuit of justice should recognize the humanity of all those who come into contact with it, not sanction the use of a discriminatory practice that denies individuals their rights, fails to respect their dignity, and stands in stark contrast to the fundamental values of our democratic system of governance,” the letter said.

The executions went ahead for inmates whose lawyers claimed were too mentally ill or intellectually disabled to fully grasp why they were being put to death. Lawyers for Lisa Montgomery, convicted of killing a pregnant Missouri woman and cutting out her baby, said her mental illness was partly triggered by years of horrific sexual abuse as a child. Days before Biden took office, she became the first woman executed by the federal government in nearly seven decades.

The groups told Biden he has the power to dismantle the death chamber building at the Federal Correctional Complex in Terre Haute, Indiana — the small building where the 13 executions were carried out in six months — in addition to rescinding the Justice Department’s execution protocols and a regulation that no longer required federal death sentences to be carried out by lethal injection and cleared the way to use other methods like firing squads and poison gas.

They also said Biden could prohibit prosecutors from seeking death sentences and commute the sentences of the several dozen inmates on federal death row.

Far-reaching steps by Biden, the letter said, would also preclude any future president from restarting federal executions. Trump’s predecessor, Barack Obama, halted federal executions but never cleared death row or sought to strike the death penalty from U.S. statutes. That left the door open for Trump to resume them.

“We … recognize that if there is one thing that the waning months of the Trump presidency also made clear, it is the horrendous implications of simply having an informal federal death penalty moratorium in place,” it said.

Cynthia Roseberry, the ACLU’s deputy director of policy for the justice division, said she knows that Biden has a lot on his plate and that he should be given some time to act on the death penalty. But she said the groups wanted to assure Biden “that there is broad based support to be bold” on the issue and that some don’t require complicated policy initiatives or new legislation.